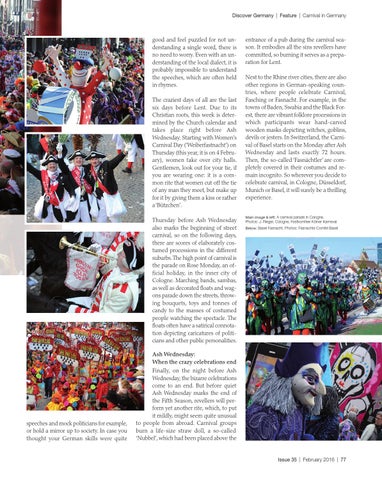 good and feel puzzled for not understanding a single word, there is no need to worry. Even with an understanding of the local dialect, it is probably impossible to understand the speeches, which are often held in rhymes. The craziest days of all are the last six days before Lent. Due to its Christian roots, this week is determined by the Church calendar and takes place right before Ash Wednesday. Starting with Women’s Carnival Day (‘Weiberfastnacht’) on Thursday (this year, it is on 4 February), women take over city halls. Gentlemen, look out for your tie, if you are wearing one: it is a common rite that women cut off the tie of any man they meet, but make up for it by giving them a kiss or rather a‘Bützchen’. Thursday before Ash Wednesday also marks the beginning of street carnival, so on the following days, there are scores of elaborately costumed processions in the different suburbs.The high point of carnival is the parade on Rose Monday, an official holiday, in the inner city of Cologne. Marching bands, sambas, as well as decorated floats and wagons parade down the streets, throwing bouquets, toys and tonnes of candy to the masses of costumed people watching the spectacle. The floats often have a satirical connotation depicting caricatures of politicians and other public personalities.

entrance of a pub during the carnival season. It embodies all the sins revellers have committed, so burning it serves as a preparation for Lent. Next to the Rhine river cities, there are also other regions in German-speaking countries, where people celebrate Carnival, Fasching or Fasnacht. For example, in the towns of Baden, Swabia and the Black Forest, there are vibrant folklore processions in which participants wear hand-carved wooden masks depicting witches, goblins, devils or jesters. In Switzerland, the Carnival of Basel starts on the Monday after Ash Wednesday and lasts exactly 72 hours. Then, the so-called ‘Fasnächtler’ are completely covered in their costumes and remain incognito. So wherever you decide to celebrate carnival, in Cologne, Düsseldorf, Munich or Basel, it will surely be a thrilling experience.

speeches and mock politicians for example, or hold a mirror up to society. In case you thought your German skills were quite

Finally, on the night before Ash Wednesday, the bizarre celebrations come to an end. But before quiet Ash Wednesday marks the end of the Fifth Season, revellers will perform yet another rite, which, to put it mildly, might seem quite unusual to people from abroad. Carnival groups burn a life-size straw doll, a so-called ‘Nubbel’, which had been placed above the