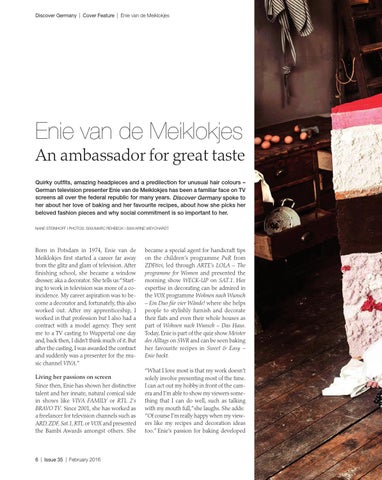 Enie van de Meiklokjes An ambassador for great taste Quirky outfits, amazing headpieces and a predilection for unusual hair colours – German television presenter Enie van de Meiklokjes has been a familiar face on TV screens all over the federal republic for many years. Discover Germany spoke to her about her love of baking and her favourite recipes, about how she picks her beloved fashion pieces and why social commitment is so important to her. NANE STEINHOFF I PHOTOS: SIXX/MARC REHBECK | SIXX/ARNE WEYCHARDT

Born in Potsdam in 1974, Enie van de Meiklokjes first started a career far away from the glitz and glam of television. After finishing school, she became a window dresser; aka a decorator. She tells us:“Starting to work in television was more of a coincidence. My career aspiration was to become a decorator and, fortunately, this also worked out. After my apprenticeship, I worked in that profession but I also had a contract with a model agency. They sent me to a TV casting to Wuppertal one day and, back then, I didn’t think much of it. But after the casting, I was awarded the contract and suddenly was a presenter for the music channel VIVA.” Living her passions on screen Since then, Enie has shown her distinctive talent and her innate, natural comical side in shows like VIVA FAMILY or RTL 2’s BRAVO TV. Since 2001, she has worked as a freelancer for television channels such as ARD, ZDF, Sat.1, RTL or VOX and presented the Bambi Awards amongst others. She

became a special agent for handicraft tips on the children’s programme PuR from ZDFtivi, led through ARTE’s LOLA – The programme for Women and presented the morning show WECK-UP on SAT.1. Her expertise in decorating can be admired in the VOX programme Wohnen nach Wunsch – Ein Duo für vier Wände! where she helps people to stylishly furnish and decorate their flats and even their whole houses as part of Wohnen nach Wunsch – Das Haus. Today, Enie is part of the quiz show Meister des Alltags on SWR and can be seen baking her favourite recipes in Sweet &amp; Easy – Enie backt. “What I love most is that my work doesn’t solely involve presenting most of the time. I can act out my hobby in front of the camera and I’m able to show my viewers something that I can do well, such as talking with my mouth full,”she laughs. She adds: “Of course I’m really happy when my viewers like my recipes and decoration ideas too.” Enie’s passion for baking developed