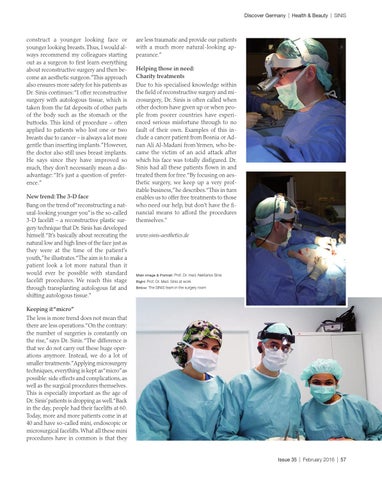 construct a younger looking face or younger looking breasts. Thus, I would always recommend my colleagues starting out as a surgeon to first learn everything about reconstructive surgery and then become an aesthetic surgeon.”This approach also ensures more safety for his patients as Dr. Sinis continues:“I offer reconstructive surgery with autologous tissue, which is taken from the fat deposits of other parts of the body such as the stomach or the buttocks. This kind of procedure – often applied to patients who lost one or two breasts due to cancer – is always a lot more gentle than inserting implants.”However, the doctor also still uses breast implants. He says since they have improved so much, they don’t necessarily mean a disadvantage: “It’s just a question of preference.” New trend: The 3-D face Bang on the trend of“reconstructing a natural-looking younger you”is the so-called 3-D facelift – a reconstructive plastic surgery technique that Dr. Sinis has developed himself.“It’s basically about recreating the natural low and high lines of the face just as they were at the time of the patient’s youth,”he illustrates.“The aim is to make a patient look a lot more natural than it would ever be possible with standard facelift procedures. We reach this stage through transplanting autologous fat and shifting autologous tissue.”

are less traumatic and provide our patients with a much more natural-looking appearance.” Helping those in need: Charity treatments Due to his specialised knowledge within the field of reconstructive surgery and microsurgery, Dr. Sinis is often called when other doctors have given up or when people from poorer countries have experienced serious misfortune through to no fault of their own. Examples of this include a cancer patient from Bosnia or Adnan Ali Al-Madani from Yemen, who became the victim of an acid attack after which his face was totally disfigured. Dr. Sinis had all these patients flown in and treated them for free.“By focusing on aesthetic surgery, we keep up a very profitable business,”he describes.“This in turn enables us to offer free treatments to those who need our help, but don’t have the financial means to afford the procedures themselves.” www.sinis-aesthetics.de

Keeping it“micro” The less is more trend does not mean that there are less operations.“On the contrary: the number of surgeries is constantly on the rise,” says Dr. Sinis.“The difference is that we do not carry out these huge operations anymore. Instead, we do a lot of smaller treatments.”Applying microsurgery techniques, everything is kept as“micro”as possible: side effects and complications, as well as the surgical procedures themselves. This is especially important as the age of Dr. Sinis’patients is dropping as well.“Back in the day, people had their facelifts at 60. Today, more and more patients come in at 40 and have so-called mini, endoscopic or microsurgical facelifts. What all these mini procedures have in common is that they