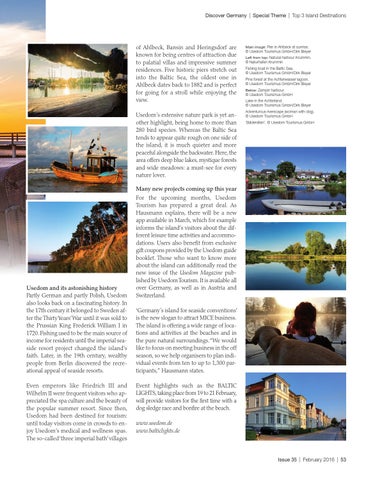 of Ahlbeck, Bansin and Heringsdorf are known for being centres of attraction due to palatial villas and impressive summer residences. Five historic piers stretch out into the Baltic Sea, the oldest one in Ahlbeck dates back to 1882 and is perfect for going for a stroll while enjoying the view. Usedom´s extensive nature park is yet another highlight, being home to more than 280 bird species. Whereas the Baltic Sea tends to appear quite rough on one side of the island, it is much quieter and more peaceful alongside the backwater. Here, the area offers deep blue lakes, mystique forests and wide meadows: a must-see for every nature lover.

Many new projects coming up this year

Usedom and its astonishing history Partly German and partly Polish, Usedom also looks back on a fascinating history. In the 17th century it belonged to Sweden after the Thirty Years’War until it was sold to the Prussian King Frederick William I in 1720. Fishing used to be the main source of income for residents until the imperial seaside resort project changed the island’s faith. Later, in the 19th century, wealthy people from Berlin discovered the recreational appeal of seaside resorts. Even emperors like Friedrich III and Wilhelm II were frequent visitors who appreciated the spa culture and the beauty of the popular summer resort. Since then, Usedom had been destined for tourism: until today visitors come in crowds to enjoy Usedom’s medical and wellness spas. The so-called‘three imperial bath’villages

For the upcoming months, Usedom Tourism has prepared a great deal. As Hausmann explains, there will be a new app available in March, which for example informs the island’s visitors about the different leisure time activities and accommodations. Users also benefit from exclusive gift coupons provided by the Usedom guide booklet. Those who want to know more about the island can additionally read the new issue of the Usedom Magazine published by Usedom Tourism. It is available all over Germany, as well as in Austria and Switzerland. ‘Germany´s island for seaside conventions’ is the new slogan to attract MICE business. The island is offering a wide range of locations and activities at the beaches and in the pure natural surroundings.“We would like to focus on meeting business in the off season, so we help organisers to plan individual events from ten to up to 1,300 participants,” Hausmann states. Event highlights such as the BALTIC LIGHTS, taking place from 19 to 21 February, will provide visitors for the first time with a dog sledge race and bonfire at the beach. www.usedom.de www.balticlights.de