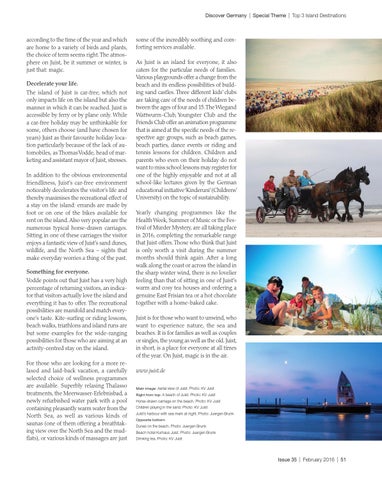 according to the time of the year and which are home to a variety of birds and plants, the choice of term seems right. The atmosphere on Juist, be it summer or winter, is just that: magic. Decelerate your life. The island of Juist is car-free, which not only impacts life on the island but also the manner in which it can be reached. Juist is accessible by ferry or by plane only. While a car-free holiday may be unthinkable for some, others choose (and have chosen for years) Juist as their favourite holiday location particularly because of the lack of automobiles, as Thomas Vodde, head of marketing and assistant mayor of Juist, stresses. In addition to the obvious environmental friendliness, Juist’s car-free environment noticeably decelerates the visitor’s life and thereby maximises the recreational effect of a stay on the island: errands are made by foot or on one of the bikes available for rent on the island. Also very popular are the numerous typical horse-drawn carriages. Sitting in one of these carriages the visitor enjoys a fantastic view of Juist’s sand dunes, wildlife, and the North Sea – sights that make everyday worries a thing of the past. Something for everyone. Vodde points out that Juist has a very high percentage of returning visitors, an indicator that visitors actually love the island and everything it has to offer. The recreational possibilities are manifold and match everyone’s taste. Kite-surfing or riding lessons, beach walks, triathlons and island runs are but some examples for the wide-ranging possibilities for those who are aiming at an activity-centred stay on the island. For those who are looking for a more relaxed and laid-back vacation, a carefully selected choice of wellness programmes are available. Superbly relaxing Thalasso treatments, the Meerwasser-Erlebnisbad, a newly refurbished water park with a pool containing pleasantly warm water from the North Sea, as well as various kinds of saunas (one of them offering a breathtaking view over the North Sea and the mudflats), or various kinds of massages are just

some of the incredibly soothing and comforting services available. As Juist is an island for everyone, it also caters for the particular needs of families. Various playgrounds offer a change from the beach and its endless possibilities of building sand castles. Three different kids’ clubs are taking care of the needs of children between the ages of four and 15.The Wiegand Wattwurm-Club, Youngster Club and the Friends Club offer an animation programme that is aimed at the specific needs of the respective age groups, such as beach games, beach parties, dance events or riding and tennis lessons for children. Children and parents who even on their holiday do not want to miss school lessons may register for one of the highly enjoyable and not at all school-like lectures given by the German educational initiative‘Kinderuni’(Childrens’ University) on the topic of sustainability. Yearly changing programmes like the Health Week, Summer of Music or the Festival of Murder Mystery, are all taking place in 2016, completing the remarkable range that Juist offers. Those who think that Juist is only worth a visit during the summer months should think again. After a long walk along the coast or across the island in the sharp winter wind, there is no lovelier feeling than that of sitting in one of Juist’s warm and cosy tea houses and ordering a genuine East Frisian tea or a hot chocolate together with a home-baked cake. Juist is for those who want to unwind, who want to experience nature, the sea and beaches. It is for families as well as couples or singles, the young as well as the old. Juist, in short, is a place for everyone at all times of the year. On Juist, magic is in the air. www.juist.de Main image: Aerial view of Juist. Photo: KV Juist Right from top: A beach of Juist. Photo: KV Juist Horse-drawn carriage on the beach. Photo: KV Juist Children playing in the sand. Photo: KV Juist Juist’s harbour with sea mark at night. Photo: Juergen Brunk Opposite bottom: Dunes on the beach. Photo: Juergen Brunk Beach hotel Kurhaus Juist. Photo: Juergen Brunk Drinking tea. Photo: KV Juist