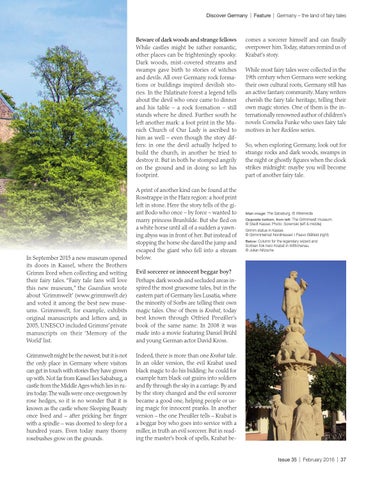 Beware of dark woods and strange fellows While castles might be rather romantic, other places can be frighteningly spooky. Dark woods, mist-covered streams and swamps gave birth to stories of witches and devils. All over Germany rock formations or buildings inspired devilish stories. In the Palatinate forest a legend tells about the devil who once came to dinner and his table – a rock formation – still stands where he dined. Further south he left another mark: a foot print in the Munich Church of Our Lady is ascribed to him as well – even though the story differs: in one the devil actually helped to build the church, in another he tried to destroy it. But in both he stomped angrily on the ground and in doing so left his footprint.

In September 2015 a new museum opened its doors in Kassel, where the Brothers Grimm lived when collecting and writing their fairy tales. “Fairy tale fans will love this new museum,” the Guardian wrote about ‘Grimmwelt’ (www.grimmwelt.de) and voted it among the best new museums. Grimmwelt, for example, exhibits original manuscripts and letters and, in 2005, UNESCO included Grimms’ private manuscripts on their ‘Memory of the World’ list. Grimmwelt might be the newest, but it is not the only place in Germany where visitors can get in touch with stories they have grown up with. Not far from Kassel lies Sababurg, a castle from the Middle Ages which lies in ruins today.The walls were once overgrown by rose hedges, so it is no wonder that it is known as the castle where Sleeping Beauty once lived and – after pricking her finger with a spindle – was doomed to sleep for a hundred years. Even today many thorny rosebushes grow on the grounds.

A print of another kind can be found at the Rosstrappe in the Harz region: a hoof print left in stone. Here the story tells of the giant Bodo who once – by force – wanted to marry princess Brunhilde. But she fled on a white horse until all of a sudden a yawning abyss was in front of her. But instead of stopping the horse she dared the jump and escaped the giant who fell into a stream below.

comes a sorcerer himself and can finally overpower him.Today, statues remind us of Krabat’s story. While most fairy tales were collected in the 19th century when Germans were seeking their own cultural roots, Germany still has an active fantasy community. Many writers cherish the fairy tale heritage, telling their own magic stories. One of them is the internationally renowned author of children’s novels Cornelia Funke who uses fairy tale motives in her Reckless series. So, when exploring Germany, look out for strange rocks and dark woods, swamps in the night or ghostly figures when the clock strikes midnight: maybe you will become part of another fairy tale.

Evil sorcerer or innocent beggar boy? Perhaps dark woods and secluded areas inspired the most gruesome tales, but in the eastern part of Germany lies Lusatia, where the minority of Sorbs are telling their own magic tales. One of them is Krabat, today best known through Otfried Preußler’s book of the same name. In 2008 it was made into a movie featuring Daniel Brühl and young German actor David Kross. Indeed, there is more than one Krabat tale. In an older version, the evil Krabat used black magic to do his bidding: he could for example turn black oat grains into soldiers and fly through the sky in a carriage. By and by the story changed and the evil sorcerer became a good one, helping people or using magic for innocent pranks. In another version – the one Preußler tells – Krabat is a beggar boy who goes into service with a miller, in truth an evil sorcerer. But in reading the master’s book of spells, Krabat be-