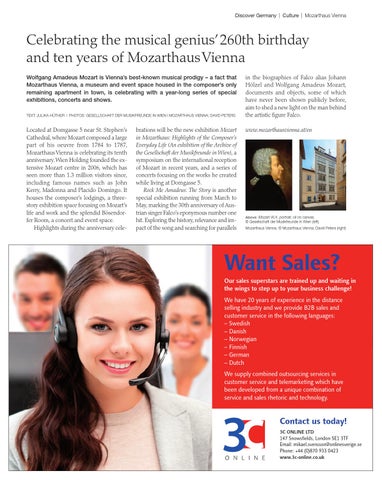 Located at Domgasse 5 near St. Stephen’s Cathedral, where Mozart composed a large part of his oeuvre from 1784 to 1787, Mozarthaus Vienna is celebrating its tenth anniversary. Wien Holding founded the extensive Mozart centre in 2006, which has seen more than 1.3 million visitors since, including famous names such as John Kerry, Madonna and Placido Domingo. It houses the composer’s lodgings, a threestory exhibition space focusing on Mozart’s life and work and the splendid Bösendorfer Room, a concert and event space. Highlights during the anniversary cele-

brations will be the new exhibition Mozart in Mozarthaus: Highlights of the Composer’s Everyday Life (An exhibition of the Archive of the Gesellschaft der Musikfreunde in Wien), a symposium on the international reception of Mozart in recent years, and a series of concerts focusing on the works he created while living at Domgasse 5. Rock Me Amadeus: The Story is another special exhibition running from March to May, marking the 30th anniversary of Austrian singer Falco’s eponymous number one hit. Exploring the history, relevance and impact of the song and searching for parallels

in the biographies of Falco alias Johann Hölzel and Wolfgang Amadeus Mozart, documents and objects, some of which have never been shown publicly before, aim to shed a new light on the man behind the artistic figure Falco. www.mozarthausvienna.at/en

Want Sales? Our sales superstars are trained up and waiting in the wings to step up to your business challenge! We have 20 years of experience in the distance selling industry and we provide B2B sales and customer service in the following languages: – Swedish – Danish – Norwegian – Finnish – German – Dutch We supply combined outsourcing services in customer service and telemarketing which have been developed from a unique combination of service and sales rhetoric and technology.