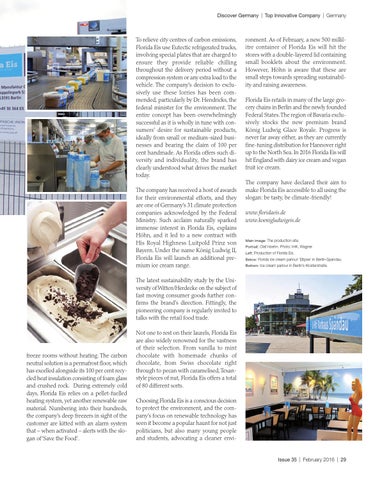 To relieve city centres of carbon emissions, Florida Eis use Eutectic refrigerated trucks, involving special plates that are charged to ensure they provide reliable chilling throughout the delivery period without a compression system or any extra load to the vehicle. The company’s decision to exclusively use these lorries has been commended, particularly by Dr. Hendricks, the federal minister for the environment. The entire concept has been overwhelmingly successful as it is wholly in tune with consumers’ desire for sustainable products, ideally from small or medium-sized businesses and bearing the claim of 100 per cent handmade. As Florida offers such diversity and individuality, the brand has clearly understood what drives the market today. The company has received a host of awards for their environmental efforts, and they are one of Germany’s 31 climate protection companies acknowledged by the Federal Ministry. Such acclaim naturally sparked immense interest in Florida Eis, explains Höhn, and it led to a new contract with His Royal Highness Luitpold Prinz von Bayern. Under the name König Ludwig II, Florida Eis will launch an additional premium ice cream range.

ronment. As of February, a new 500 millilitre container of Florida Eis will hit the stores with a double-layered lid containing small booklets about the environment. However, Höhn is aware that these are small steps towards spreading sustainability and raising awareness. Florida Eis retails in many of the large grocery chains in Berlin and the newly founded Federal States. The region of Bavaria exclusively stocks the new premium brand König Ludwig Glace Royale. Progress is never far away either, as they are currently fine-tuning distribution for Hannover right up to the North Sea. In 2016 Florida Eis will hit England with dairy ice cream and vegan fruit ice cream. The company have declared their aim to make Florida Eis accessible to all using the slogan: be tasty, be climate-friendly! www.floridaeis.de www.koenigludwigeis.de

The latest sustainability study by the University of Witten/Herdecke on the subject of fast moving consumer goods further confirms the brand’s direction. Fittingly, the pioneering company is regularly invited to talks with the retail food trade.

freeze rooms without heating. The carbon neutral solution is a permafrost floor, which has excelled alongside its 100 per cent recycled heat insulation consisting of foam glass and crushed rock. During extremely cold days, Florida Eis relies on a pellet-fuelled heating system, yet another renewable raw material. Numbering into their hundreds, the company’s deep freezers in sight of the customer are kitted with an alarm system that – when activated – alerts with the slogan of‘Save the Food’.

Not one to rest on their laurels, Florida Eis are also widely renowned for the vastness of their selection. From vanilla to mint chocolate with homemade chunks of chocolate, from Swiss chocolate right through to pecan with caramelised, Texanstyle pieces of nut, Florida Eis offers a total of 80 different sorts. Choosing Florida Eis is a conscious decision to protect the environment, and the company’s focus on renewable technology has seen it become a popular haunt for not just politicians, but also many young people and students, advocating a cleaner envi-