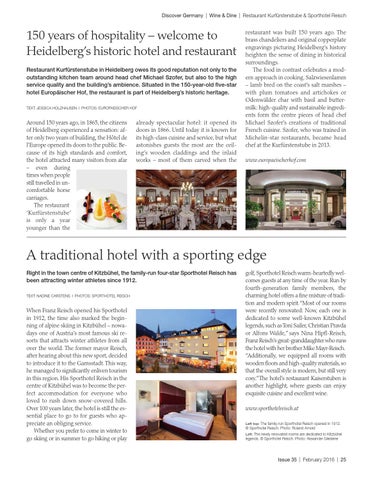 150 years of hospitality – welcome to Heidelberg’s historic hotel and restaurant Restaurant Kurfürstenstube in Heidelberg owes its good reputation not only to the outstanding kitchen team around head chef Michael Szofer, but also to the high service quality and the building’s ambience. Situated in the 150-year-old five-star hotel Europäischer Hof, the restaurant is part of Heidelberg’s historic heritage. TEXT: JESSICA HOLZHAUSEN I PHOTOS: EUROPAEISCHER HOF

Around 150 years ago, in 1865, the citizens of Heidelberg experienced a sensation: after only two years of building, the Hôtel de l’Europe opened its doors to the public. Because of its high standards and comfort, the hotel attracted many visitors from afar – even during times when people still travelled in uncomfortable horse carriages. The restaurant ‘Kurfürstenstube’ is only a year younger than the

already spectacular hotel: it opened its doors in 1866. Until today it is known for its high-class cuisine and service, but what astonishes guests the most are the ceiling’s wooden claddings and the inlaid works – most of them carved when the

restaurant was built 150 years ago. The brass chandeliers and original copperplate engravings picturing Heidelberg’s history heighten the sense of dining in historical surroundings. The food in contrast celebrates a modern approach in cooking. Salzwiesenlamm – lamb bred on the coast’s salt marshes – with plum tomatoes and artichokes or Odenwälder char with basil and buttermilk: high-quality and sustainable ingredients form the centre pieces of head chef Michael Szofer’s creations of traditional French cuisine. Szofer, who was trained in Michelin-star restaurants, became head chef at the Kurfürstenstube in 2013. www.europaeischerhof.com

A traditional hotel with a sporting edge Right in the town centre of Kitzbühel, the family-run four-star Sporthotel Reisch has been attracting winter athletes since 1912. TEXT: NADINE CARSTENS I PHOTOS: SPORTHOTEL REISCH

When Franz Reisch opened his Sporthotel in 1912, the time also marked the beginning of alpine skiing in Kitzbühel – nowadays one of Austria’s most famous ski resorts that attracts winter athletes from all over the world. The former mayor Reisch, after hearing about this new sport, decided to introduce it to the Gamsstadt. This way, he managed to significantly enliven tourism in this region. His Sporthotel Reisch in the centre of Kitzbühel was to become the perfect accommodation for everyone who loved to rush down snow-covered hills. Over 100 years later, the hotel is still the essential place to go to for guests who appreciate an obliging service. Whether you prefer to come in winter to go skiing or in summer to go hiking or play

golf, Sporthotel Reisch warm-heartedly welcomes guests at any time of the year. Run by fourth-generation family members, the charming hotel offers a fine mixture of tradition and modern spirit.“Most of our rooms were recently renovated: Now, each one is dedicated to some well-known Kitzbühel legends, such as Toni Sailer, Christian Pravda or Alfons Walde,” says Nina Hipfl-Reisch, Franz Reisch’s great-granddaughter who runs the hotel with her brother Mike Mayr-Reisch. “Additionally, we equipped all rooms with wooden floors and high-quality materials, so that the overall style is modern, but still very cosy.”The hotel’s restaurant Kaiserstuben is another highlight, where guests can enjoy exquisite cuisine and excellent wine. www.sporthotelreisch.at Left top: The family-run Sporthotel Reisch opened in 1912. © Sporthotel Reisch. Photo: Roland Arnold Left: The newly renovated rooms are dedicated to Kitzbühel legends. © Sporthotel Reisch. Photo: Alexander Gliederer