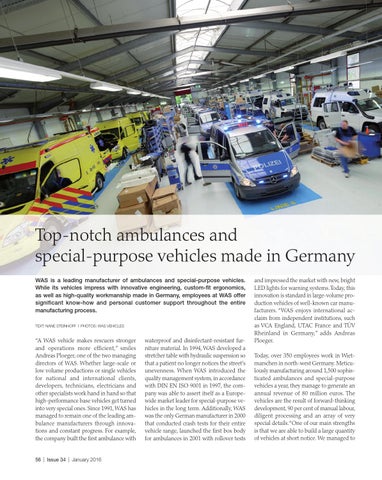 Top-notch ambulances and special-purpose vehicles made in Germany WAS is a leading manufacturer of ambulances and special-purpose vehicles. While its vehicles impress with innovative engineering, custom-fit ergonomics, as well as high-quality workmanship made in Germany, employees at WAS offer significant know-how and personal customer support throughout the entire manufacturing process. TEXT: NANE STEINHOFF I PHOTOS: WAS VEHICLES

“A WAS vehicle makes rescuers stronger and operations more efficient,” smiles Andreas Ploeger, one of the two managing directors of WAS. Whether large-scale or low volume productions or single vehicles for national and international clients, developers, technicians, electricians and other specialists work hand in hand so that high-performance base vehicles get turned into very special ones. Since 1991, WAS has managed to remain one of the leading ambulance manufacturers through innovations and constant progress. For example, the company built the first ambulance with

waterproof and disinfectant-resistant furniture material. In 1994, WAS developed a stretcher table with hydraulic suspension so that a patient no longer notices the street’s unevenness. When WAS introduced the quality management system, in accordance with DIN EN ISO 9001 in 1997, the company was able to assert itself as a Europewide market leader for special-purpose vehicles in the long term. Additionally, WAS was the only German manufacturer in 2000 that conducted crash tests for their entire vehicle range, launched the first box body for ambulances in 2001 with rollover tests

and impressed the market with new, bright LED lights for warning systems.Today, this innovation is standard in large-volume production vehicles of well-known car manufacturers. “WAS enjoys international acclaim from independent institutions, such as VCA England, UTAC France and TÜV Rheinland in Germany,” adds Andreas Ploeger. Today, over 350 employees work in Wietmarschen in north-west Germany. Meticulously manufacturing around 1,500 sophisticated ambulances and special-purpose vehicles a year, they manage to generate an annual revenue of 80 million euros. The vehicles are the result of forward-thinking development, 90 per cent of manual labour, diligent processing and an array of very special details.“One of our main strengths is that we are able to build a large quantity of vehicles at short notice. We managed to