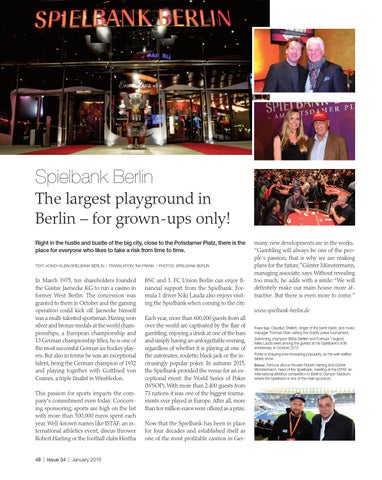 Spielbank Berlin The largest playground in Berlin – for grown-ups only! Right in the hustle and bustle of the big city, close to the Potsdamer Platz, there is the place for everyone who likes to take a risk from time to time. TEXT: HONZA KLEIN/SPIELBANK BERLIN | TRANSLATION: INA FRANK | PHOTOS: SPIELBANK BERLIN

In March 1975, ten shareholders founded the Gustav Jaenecke KG to run a casino in former West Berlin. The concession was granted to them in October and the gaming operation could kick off. Jaenecke himself was a multi-talented sportsman. Having won silver and bronze medals at the world championships, a European championship and 13 German championship titles, he is one of the most successful German ice hockey players. But also in tennis he was an exceptional talent, being the German champion of 1932 and playing together with Gottfried von Cramm, a triple finalist in Wimbledon. This passion for sports impacts the company&#39;s commitment even today. Concerning sponsoring, sports are high on the list with more than 500,000 euros spent each year. Well-known names like ISTAF, an international athletics event, discus thrower Robert Harting or the football clubs Hertha

BSC and 1. FC Union Berlin can enjoy financial support from the Spielbank. Formula 1 driver Niki Lauda also enjoys visiting the Spielbank when coming to the city.

many, new developments are in the works. “Gambling will always be one of the people&#39;s passion, that is why we are making plans for the future,”Günter Münstermann, managing associate, says. Without revealing too much, he adds with a smile: “We will definitely make our main house more attractive. But there is even more to come.” www.spielbank-berlin.de

Each year, more than 600,000 guests from all over the world are captivated by the flair of gambling, enjoying a drink at one of the bars and simply having an unforgettable evening, regardless of whether it is playing at one of the automates, roulette, black jack or the increasingly popular poker. In autumn 2015, the Spielbank provided the venue for an exceptional event: the World Series of Poker (WSOP). With more than 2,400 guests from 73 nations it was one of the biggest tournaments ever played in Europe. After all, more than ten million euros were offered as a prize. Now that the Spielbank has been in place for four decades and established itself as one of the most profitable casinos in Ger-

From top: Claudius Dreilich, singer of the band Karat, and music manager Thomas Stein visiting the charity poker tournament. Swimming champion Britta Steffen and Formula 1 legend Nikki Lauda were among the guests at the Spielbank’s 40th anniversary in October 2015. Poker is enjoying ever-increasing popularity, as the well-staffed tables show. Below: Famous discus thrower Robert Harting and Günter Münstermann, head of the Spielbank, meeting at the ISTAF, an international athletics competition in Berlin’s Olympic Stadium, where the Spielbank is one of the main sponsors.