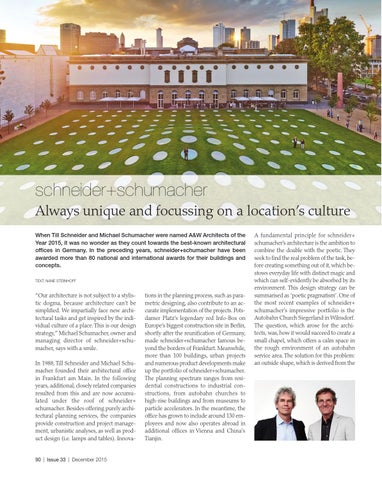 schneider+schumacher Always unique and focussing on a location’s culture When Till Schneider and Michael Schumacher were named A&amp;W Architects of the Year 2015, it was no wonder as they count towards the best-known architectural offices in Germany. In the preceding years, schneider+schumacher have been awarded more than 80 national and international awards for their buildings and concepts. TEXT: NANE STEINHOFF

“Our architecture is not subject to a stylistic dogma, because architecture can’t be simplified. We impartially face new architectural tasks and get inspired by the individual culture of a place. This is our design strategy,” Michael Schumacher, owner and managing director of schneider+schumacher, says with a smile. In 1988, Till Schneider and Michael Schumacher founded their architectural office in Frankfurt am Main. In the following years, additional, closely related companies resulted from this and are now accumulated under the roof of schneider+ schumacher. Besides offering purely architectural planning services, the companies provide construction and project management, urbanistic analyses, as well as product design (i.e. lamps and tables). Innova-

tions in the planning process, such as parametric designing, also contribute to an accurate implementation of the projects. Potsdamer Platz’s legendary red Info-Box on Europe’s biggest construction site in Berlin, shortly after the reunification of Germany, made schneider+schumacher famous beyond the borders of Frankfurt. Meanwhile, more than 100 buildings, urban projects and numerous product developments make up the portfolio of schneider+schumacher. The planning spectrum ranges from residential constructions to industrial constructions, from autobahn churches to high-rise buildings and from museums to particle accelerators. In the meantime, the office has grown to include around 130 employees and now also operates abroad in additional offices in Vienna and China’s Tianjin.

A fundamental principle for schneider+ schumacher’s architecture is the ambition to combine the doable with the poetic. They seek to find the real problem of the task, before creating something out of it, which bestows everyday life with distinct magic and which can self-evidently be absorbed by its environment. This design strategy can be summarised as ‘poetic pragmatism’. One of the most recent examples of schneider+ schumacher’s impressive portfolio is the Autobahn Church Siegerland in Wilnsdorf. The question, which arose for the architects, was, how it would succeed to create a small chapel, which offers a calm space in the rough environment of an autobahn service area. The solution for this problem: an outside shape, which is derived from the