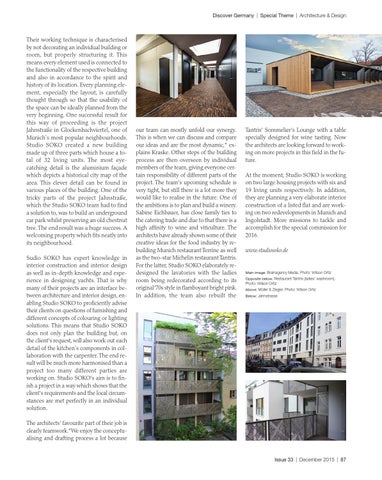 Their working technique is characterised by not decorating an individual building or room, but properly structuring it. This means every element used is connected to the functionality of the respective building and also in accordance to the spirit and history of its location. Every planning element, especially the layout, is carefully thought through so that the usability of the space can be ideally planned from the very beginning. One successful result for this way of proceeding is the project Jahnstraße in Glockenbachviertel, one of Munich&#96;s most popular neighbourhoods. Studio SOKO created a new building made up of three parts which house a total of 32 living units. The most eyecatching detail is the aluminium façade which depicts a historical city map of the area. This clever detail can be found in various places of the building. One of the tricky parts of the project Jahnstraße, which the Studio SOKO team had to find a solution to, was to build an underground car park whilst preserving an old chestnut tree. The end result was a huge success. A welcoming property which fits neatly into its neighbourhood. Sudio SOKO has expert knowledge in interior construction and interior design as well as in-depth knowledge and experience in designing yachts. That is why many of their projects are an interface between architecture and interior design, enabling Studio SOKO to proficiently advise their clients on questions of furnishing and different concepts of colouring or lighting solutions. This means that Studio SOKO does not only plan the building but, on the client&#39;s request, will also work out each detail of the kitchen&#96;s components in collaboration with the carpenter. The end result will be much more harmonised than a project too many different parties are working on. Studio SOKO&#39;s aim is to finish a project in a way which shows that the client&#39;s requirements and the local circumstances are met perfectly in an individual solution.

our team can mostly unfold our synergy. This is when we can discuss and compare our ideas and are the most dynamic,“ explains Kraske. Other steps of the building process are then overseen by individual members of the team, giving everyone certain responsibility of different parts of the project. The team&#39;s upcoming schedule is very tight, but still there is a lot more they would like to realise in the future. One of the ambitions is to plan and build a winery. Sabine Eichbauer, has close family ties to the catering trade and due to that there is a high affinity to wine and viticulture. The architects have already shown some of their creative ideas for the food industry by rebuilding Munich restaurant Terrine as well as the two-star Michelin restaurant Tantris. For the latter, Studio SOKO elaborately redesigned the lavatories with the ladies room being redecorated according to its original‘70s style in flamboyant bright pink. In addition, the team also rebuilt the

Tantris&#39; Sommelier&#39;s Lounge with a table specially designed for wine tasting. Now the architects are looking forward to working on more projects in this field in the future. At the moment, Studio SOKO is working on two large housing projects with six and 19 living units respectively. In addition, they are planning a very elaborate interior construction of a listed flat and are working on two redevelopments in Munich and Ingolstadt. More missions to tackle and accomplish for the special commission for 2016. www.studiosoko.de

The architects&#39; favourite part of their job is clearly teamwork.“We enjoy the conceptualising and drafting process a lot because