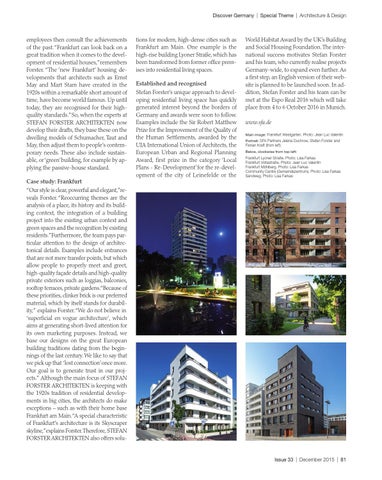 employees then consult the achievements of the past.“Frankfurt can look back on a great tradition when it comes to the development of residential houses,”remembers Forster. “The ‘new Frankfurt’ housing developments that architects such as Ernst May and Mart Stam have created in the 1920s within a remarkable short amount of time, have become world famous. Up until today, they are recognised for their highquality standards.”So, when the experts at STEFAN FORSTER ARCHITEKTEN now develop their drafts, they base these on the dwelling models of Schumacher, Taut and May, then adjust them to people’s contemporary needs. These also include sustainable, or ‘green’building, for example by applying the passive-house standard.

tions for modern, high-dense cities such as Frankfurt am Main. One example is the high-rise building Lyoner Straße, which has been transformed from former office premises into residential living spaces. Established and recognised Stefan Forster’s unique approach to developing residential living space has quickly generated interest beyond the borders of Germany and awards were soon to follow. Examples include the Sir Robert Matthew Prize for the Improvement of the Quality of the Human Settlements, awarded by the UIA International Union of Architects, the European Urban and Regional Planning Award, first prize in the category ‘Local Plans - Re-Development’for the re-development of the city of Leinefelde or the

Case study: Frankfurt “Our style is clear, powerful and elegant,”reveals Forster. “Reoccurring themes are the analysis of a place, its history and its building context, the integration of a building project into the existing urban context and green spaces and the recognition by existing residents.”Furthermore, the team pays particular attention to the design of architectonical details. Examples include entrances that are not mere transfer points, but which allow people to properly meet and greet, high-quality façade details and high-quality private exteriors such as loggias, balconies, rooftop terraces, private gardens.“Because of these priorities, clinker brick is our preferred material, which by itself stands for durability,” explains Forster.“We do not believe in ‘superficial en vogue architecture’, which aims at generating short-lived attention for its own marketing purposes. Instead, we base our designs on the great European building traditions dating from the beginnings of the last century. We like to say that we pick up that ‘lost connection’once more. Our goal is to generate trust in our projects.” Although the main focus of STEFAN FORSTER ARCHITEKTEN is keeping with the 1920s tradition of residential developments in big cities, the architects do make exceptions – such as with their home base Frankfurt am Main.“A special characteristic of Frankfurt’s architecture is its Skyscraper skyline,”explains Forster.Therefore, STEFAN FORSTER ARCHITEKTEN also offers solu-