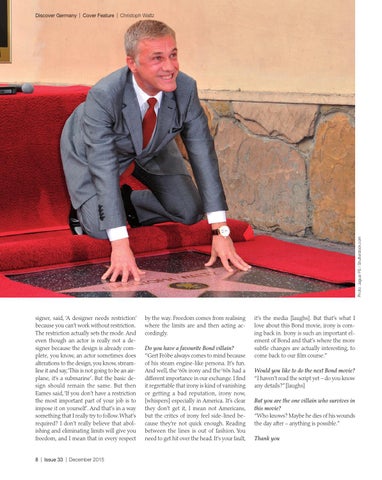 signer, said, ‘A designer needs restriction’ because you can’t work without restriction. The restriction actually sets the mode. And even though an actor is really not a designer because the design is already complete, you know, an actor sometimes does alterations to the design, you know, streamline it and say,‘This is not going to be an airplane, it’s a submarine’. But the basic design should remain the same. But then Eames said,‘If you don’t have a restriction the most important part of your job is to impose it on yourself’. And that’s in a way something that I really try to follow. What’s required? I don’t really believe that abolishing and eliminating limits will give you freedom, and I mean that in every respect

by the way. Freedom comes from realising where the limits are and then acting accordingly. Do you have a favourite Bond villain? “Gert Fröbe always comes to mind because of his steam engine-like persona. It’s fun. And well, the ‘60s irony and the ‘60s had a different importance in our exchange. I find it regrettable that irony is kind of vanishing or getting a bad reputation, irony now, [whispers] especially in America. It’s clear they don’t get it, I mean not Americans, but the critics of irony feel side-lined because they’re not quick enough. Reading between the lines is out of fashion. You need to get hit over the head. It’s your fault,

it’s the media [laughs]. But that’s what I love about this Bond movie, irony is coming back in. Irony is such an important element of Bond and that’s where the more subtle changes are actually interesting, to come back to our film course.” Would you like to do the next Bond movie? “I haven’t read the script yet – do you know any details?”[laughs] But you are the one villain who survives in this movie? “Who knows? Maybe he dies of his wounds the day after – anything is possible.” Thank you