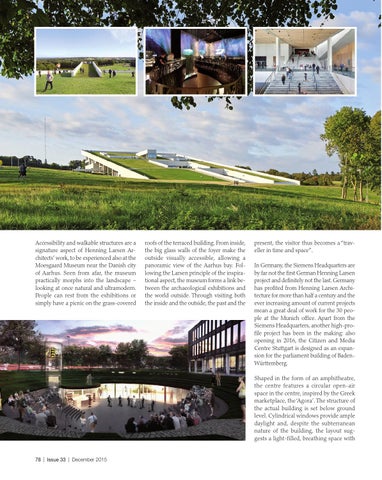 Accessibility and walkable structures are a signature aspect of Henning Larsen Architects’ work, to be experienced also at the Moesgaard Museum near the Danish city of Aarhus. Seen from afar, the museum practically morphs into the landscape – looking at once natural and ultramodern. People can rest from the exhibitions or simply have a picnic on the grass-covered

roofs of the terraced building. From inside, the big glass walls of the foyer make the outside visually accessible, allowing a panoramic view of the Aarhus bay. Following the Larsen principle of the inspirational aspect, the museum forms a link between the archaeological exhibitions and the world outside. Through visiting both the inside and the outside, the past and the

present, the visitor thus becomes a “traveller in time and space”. In Germany, the Siemens Headquarters are by far not the first German Henning Larsen project and definitely not the last. Germany has profited from Henning Larsen Architecture for more than half a century and the ever increasing amount of current projects mean a great deal of work for the 30 people at the Munich office. Apart from the Siemens Headquarters, another high-profile project has been in the making: also opening in 2016, the Citizen and Media Centre Stuttgart is designed as an expansion for the parliament building of BadenWürttemberg. Shaped in the form of an amphitheatre, the centre features a circular open-air space in the centre, inspired by the Greek marketplace, the ‘Agora’. The structure of the actual building is set below ground level. Cylindrical windows provide ample daylight and, despite the subterranean nature of the building, the layout suggests a light-filled, breathing space with