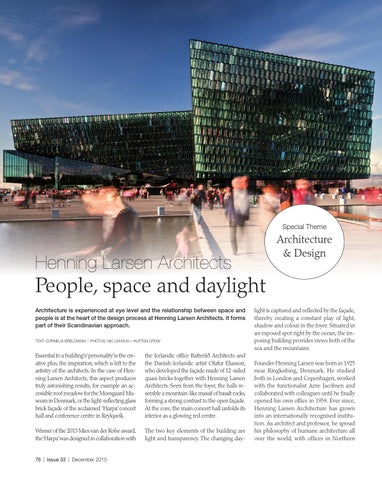 People, space and daylight Architecture is experienced at eye level and the relationship between space and people is at the heart of the design process at Henning Larsen Architects. It forms part of their Scandinavian approach. TEXT: CORNELIA BRELOWSKI | PHOTOS: NIC LEHOUX + HUFTON CROW

Essential to a building’s‘personality’is the creative plus, the inspiration, which is left to the artistry of the architects. In the case of Henning Larsen Architects, this aspect produces truly astonishing results, for example an accessible roof meadow for the Moesgaard Museum in Denmark, or the light-reflecting glass brick façade of the acclaimed ‘Harpa’concert hall and conference centre in Reykjavík.

the Icelandic office Batteríið Architects and the Danish-Icelandic artist Olafur Eliasson, who developed the façade made of 12-sided quasi-bricks together with Henning Larsen Architects. Seen from the foyer, the halls resemble a mountain-like massif of basalt rocks, forming a strong contrast to the open façade. At the core, the main concert hall unfolds its interior as a glowing red centre.

Winner of the 2013 Mies van der Rohe award, the‘Harpa’was designed in collaboration with

The two key elements of the building are light and transparency. The changing day-

light is captured and reflected by the façade, thereby creating a constant play of light, shadow and colour in the foyer. Situated in an exposed spot right by the ocean, the imposing building provides views both of the sea and the mountains. Founder Henning Larsen was born in 1925 near Ringkøbing, Denmark. He studied both in London and Copenhagen, worked with the functionalist Arne Jacobsen and collaborated with colleagues until he finally opened his own office in 1959. Ever since, Henning Larsen Architecture has grown into an internationally recognised institution. As architect and professor, he spread his philosophy of humane architecture all over the world, with offices in Northern