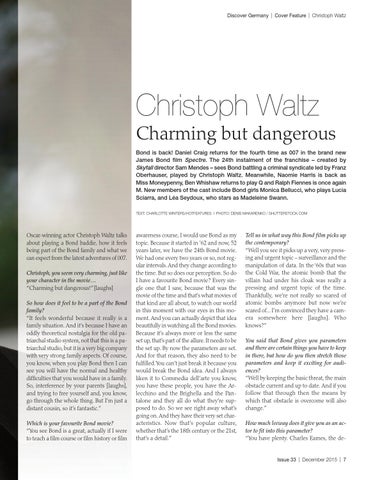 Oscar-winning actor Christoph Waltz talks about playing a Bond baddie, how it feels being part of the Bond family and what we can expect from the latest adventures of 007. Christoph, you seem very charming, just like your character in the movie… “Charming but dangerous!”[laughs] So how does it feel to be a part of the Bond family? “It feels wonderful because it really is a family situation. And it’s because I have an oddly theoretical nostalgia for the old patriarchal studio system, not that this is a patriarchal studio, but it is a very big company with very strong family aspects. Of course, you know, when you play Bond then I can see you will have the normal and healthy difficulties that you would have in a family. So, interference by your parents [laughs], and trying to free yourself and, you know, go through the whole thing. But I’m just a distant cousin, so it’s fantastic.” Which is your favourite Bond movie? “You see Bond is a great, actually if I were to teach a film course or film history or film

awareness course, I would use Bond as my topic. Because it started in ’62 and now, 52 years later, we have the 24th Bond movie. We had one every two years or so, not regular intervals. And they change according to the time. But so does our perception. So do I have a favourite Bond movie? Every single one that I saw, because that was the movie of the time and that’s what movies of that kind are all about, to watch our world in this moment with our eyes in this moment. And you can actually depict that idea beautifully in watching all the Bond movies. Because it’s always more or less the same set up, that’s part of the allure. It needs to be the set up. By now the parameters are set. And for that reason, they also need to be fulfilled.You can’t just break it because you would break the Bond idea. And I always liken it to Commedia dell’arte you know, you have these people, you have the Arlecchino and the Brighella and the Pantalone and they all do what they’re supposed to do. So we see right away what’s going on. And they have their very set characteristics. Now that’s popular culture, whether that’s the 18th century or the 21st, that’s a detail.”

Tell us in what way this Bond film picks up the contemporary? “Well you see it picks up a very, very pressing and urgent topic – surveillance and the manipulation of data. In the ‘60s that was the Cold War, the atomic bomb that the villain had under his cloak was really a pressing and urgent topic of the time. Thankfully, we’re not really so scared of atomic bombs anymore but now we’re scared of... I’m convinced they have a camera somewhere here [laughs]. Who knows?” You said that Bond gives you parameters and there are certain things you have to keep in there, but how do you then stretch those parameters and keep it exciting for audiences? “Well by keeping the basic threat, the main obstacle current and up to date. And if you follow that through then the means by which that obstacle is overcome will also change.” How much leeway does it give you as an actor to fit into this parameter? “You have plenty. Charles Eames, the de-