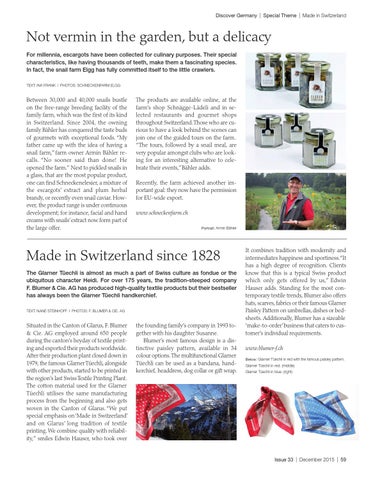 Not vermin in the garden, but a delicacy For millennia, escargots have been collected for culinary purposes. Their special characteristics, like having thousands of teeth, make them a fascinating species. In fact, the snail farm Elgg has fully committed itself to the little crawlers. TEXT: INA FRANK | PHOTOS: SCHNECKENFARM ELGG

Between 30,000 and 40,000 snails bustle on the free-range breeding facility of the family farm, which was the first of its kind in Switzerland. Since 2004, the owning family Bähler has conquered the taste buds of gourmets with exceptional foods. “My father came up with the idea of having a snail farm,” farm owner Armin Bähler recalls. “No sooner said than done! He opened the farm.” Next to pickled snails in a glass, that are the most popular product, one can find Schneckenelexier, a mixture of the escargots’ extract and plum herbal brandy, or recently even snail caviar. However, the product range is under continuous development; for instance, facial and hand creams with snails’extract now form part of the large offer.

The products are available online, at the farm’s shop Schnägge-Lädeli and in selected restaurants and gourmet shops throughout Switzerland.Those who are curious to have a look behind the scenes can join one of the guided tours on the farm. “The tours, followed by a snail meal, are very popular amongst clubs who are looking for an interesting alternative to celebrate their events,”Bähler adds. Recently, the farm achieved another important goal: they now have the permission for EU-wide export. www.schneckenfarm.ch Portrait: Armin Bähler

Made in Switzerland since 1828 The Glarner Tüechli is almost as much a part of Swiss culture as fondue or the ubiquitous character Heidi. For over 175 years, the tradition-steeped company F. Blumer &amp; Cie. AG has produced high-quality textile products but their bestseller has always been the Glarner Tüechli handkerchief. TEXT: NANE STEINHOFF I PHOTOS: F. BLUMER &amp; CIE. AG

Situated in the Canton of Glarus, F. Blumer &amp; Cie. AG employed around 650 people during the canton’s heyday of textile printing and exported their products worldwide. After their production plant closed down in 1979, the famous Glarner Tüechli, alongside with other products, started to be printed in the region’s last Swiss Textile Printing Plant. The cotton material used for the Glarner Tüechli utilises the same manufacturing process from the beginning and also gets woven in the Canton of Glarus. “We put special emphasis on ‘Made in Switzerland’ and on Glarus’ long tradition of textile printing. We combine quality with reliability,” smiles Edwin Hauser, who took over

the founding family’s company in 1993 together with his daughter Susanne. Blumer’s most famous design is a distinctive paisley pattern, available in 34 colour options.The multifunctional Glarner Tüechli can be used as a bandana, handkerchief, headdress, dog collar or gift wrap.

It combines tradition with modernity and intermediates happiness and sportiness.“It has a high degree of recognition. Clients know that this is a typical Swiss product which only gets offered by us,” Edwin Hauser adds. Standing for the most contemporary textile trends, Blumer also offers hats, scarves, fabrics or their famous Glarner Paisley Pattern on umbrellas, dishes or bedsheets. Additionally, Blumer has a sizeable ‘make-to-order’business that caters to customer’s individual requirements. www.blumer-f.ch Below: Glarner Tüechli in red with the famous paisley pattern. Glarner Tüechli in red. (middle) Glarner Tüechli in blue. (right)