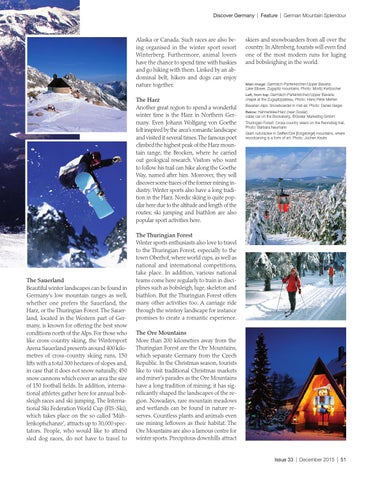 Alaska or Canada. Such races are also being organised in the winter sport resort Winterberg. Furthermore, animal lovers have the chance to spend time with huskies and go hiking with them. Linked by an abdominal belt, hikers and dogs can enjoy nature together. The Harz Another great region to spend a wonderful winter time is the Harz in Northern Germany. Even Johann Wolfgang von Goethe felt inspired by the area’s romantic landscape and visited it several times.The famous poet climbed the highest peak of the Harz mountain range, the Brocken, where he carried out geological research. Visitors who want to follow his trail can hike along the Goethe Way, named after him. Moreover, they will discover some traces of the former mining industry. Winter sports also have a long tradition in the Harz. Nordic skiing is quite popular here due to the altitude and length of the routes; ski jumping and biathlon are also popular sport activities here.

The Sauerland Beautiful winter landscapes can be found in Germany’s low mountain ranges as well, whether one prefers the Sauerland, the Harz, or the Thuringian Forest. The Sauerland, located in the Western part of Germany, is known for offering the best snow conditions north of the Alps. For those who like cross-country skiing, the Wintersport Arena Sauerland presents around 400 kilometres of cross-country skiing runs, 150 lifts with a total 300 hectares of slopes and, in case that it does not snow naturally, 450 snow cannons which cover an area the size of 150 football fields. In addition, international athletes gather here for annual bobsleigh races and ski jumping. The International Ski Federation World Cup (FIS-Ski), which takes place on the so called ‘Mühlenkopfschanze’, attracts up to 30,000 spectators. People, who would like to attend sled dog races, do not have to travel to

skiers and snowboarders from all over the country. In Altenberg, tourists will even find one of the most modern runs for luging and bobsleighing in the world.

The Thuringian Forest Winter sports enthusiasts also love to travel to the Thuringian Forest, especially to the town Oberhof, where world cups, as well as national and international competitions, take place. In addition, various national teams come here regularly to train in disciplines such as bobsleigh, luge, skeleton and biathlon. But the Thuringian Forest offers many other activities too. A carriage ride through the wintery landscape for instance promises to create a romantic experience. The Ore Mountains More than 200 kilometres away from the Thuringian Forest are the Ore Mountains, which separate Germany from the Czech Republic. In the Christmas season, tourists like to visit traditional Christmas markets and miner’s parades as the Ore Mountains have a long tradition of mining; it has significantly shaped the landscapes of the region. Nowadays, rare mountain meadows and wetlands can be found in nature reserves. Countless plants and animals even use mining leftovers as their habitat. The Ore Mountains are also a famous centre for winter sports. Precipitous downhills attract