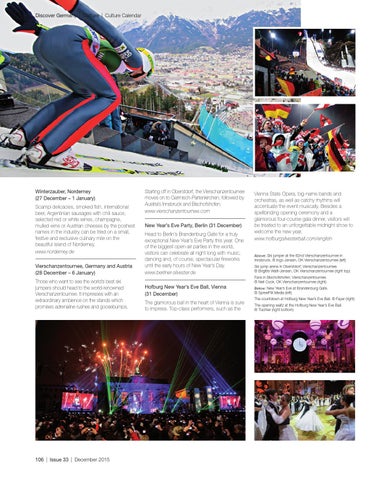 Winterzauber, Norderney (27 December – 1 January) Scampi delicacies, smoked fish, international beer, Argentinian sausages with chili sauce, selected red or white wines, champagne, mulled wine or Austrian cheeses by the poshest names in the industry can be tried on a small, festive and exclusive culinary mile on the beautiful island of Norderney. www.norderney.de Vierschanzentournee, Germany and Austria (28 December – 6 January) Those who want to see the world’s best ski jumpers should head to the world-renowned Vierschanzentournee. It impresses with an extraordinary ambience on the stands which promises adrenaline rushes and goosebumps.

Starting off in Oberstdorf, the Vierschanzentournee moves on to Garmisch-Partenkirchen, followed by Austria’s Innsbruck and Bischofshofen. www.vierschanzentournee.com New Year’s Eve Party, Berlin (31 December) Head to Berlin’s Brandenburg Gate for a truly exceptional New Year’s Eve Party this year. One of the biggest open-air parties in the world, visitors can celebrate all night long with music, dancing and, of course, spectacular fireworks until the early hours of New Year’s Day. www.berliner-silvester.de

Vienna State Opera, big-name bands and orchestras, as well as catchy rhythms will accentuate the event musically. Besides a spellbinding opening ceremony and a glamorous four-course gala dinner, visitors will be treated to an unforgettable midnight show to welcome the new year. www.hofburgsilvesterball.com/english

Hofburg New Year’s Eve Ball, Vienna (31 December) The glamorous ball in the heart of Vienna is sure to impress. Top-class performers, such as the