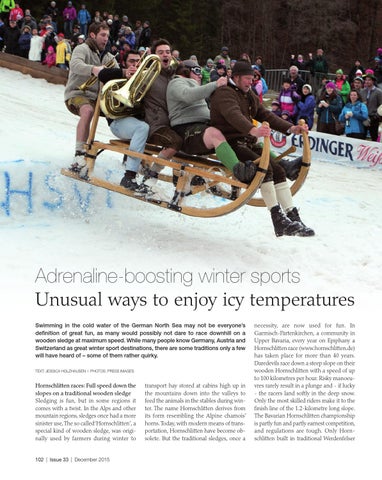 Adrenaline-boosting winter sports Unusual ways to enjoy icy temperatures Swimming in the cold water of the German North Sea may not be everyone’s definition of great fun, as many would possibly not dare to race downhill on a wooden sledge at maximum speed. While many people know Germany, Austria and Switzerland as great winter sport destinations, there are some traditions only a few will have heard of – some of them rather quirky. TEXT: JESSICA HOLZHAUSEN | PHOTOS: PRESS IMAGES

Hornschlitten races: Full speed down the slopes on a traditional wooden sledge Sledging is fun, but in some regions it comes with a twist. In the Alps and other mountain regions, sledges once had a more sinister use, The so called‘Hornschlitten’, a special kind of wooden sledge, was originally used by farmers during winter to

transport hay stored at cabins high up in the mountains down into the valleys to feed the animals in the stables during winter. The name Hornschlitten derives from its form resembling the Alpine chamois’ horns.Today, with modern means of transportation, Hornschlitten have become obsolete. But the traditional sledges, once a

necessity, are now used for fun. In Garmisch-Partenkirchen, a community in Upper Bavaria, every year on Epiphany a Hornschlitten race (www.hornschlitten.de) has taken place for more than 40 years. Daredevils race down a steep slope on their wooden Hornschlitten with a speed of up to 100 kilometres per hour. Risky manoeuvres rarely result in a plunge and - if lucky - the racers land softly in the deep snow. Only the most skilled riders make it to the finish line of the 1.2-kilometre long slope. The Bavarian Hornschlitten championship is partly fun and partly earnest competition, and regulations are tough. Only Hornschlitten built in traditional Werdenfelser