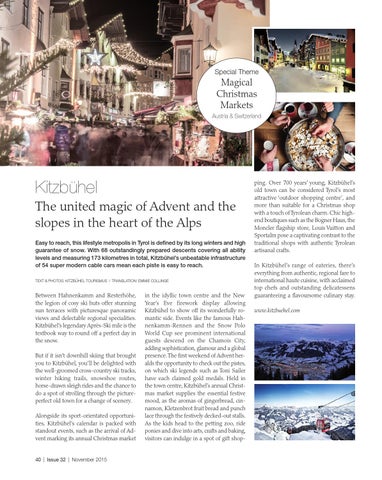 Kitzbühel The united magic of Advent and the slopes in the heart of the Alps Easy to reach, this lifestyle metropolis in Tyrol is defined by its long winters and high guarantee of snow. With 68 outstandingly prepared descents covering all ability levels and measuring 173 kilometres in total, Kitzbühel’s unbeatable infrastructure of 54 super modern cable cars mean each piste is easy to reach. TEXT & PHOTOS: KITZBÜHEL TOURISMUS | TRANSLATION: EMMIE COLLINGE

Between Hahnenkamm and Resterhöhe, the legion of cosy ski huts offer stunning sun terraces with picturesque panoramic views and delectable regional specialities. Kitzbühel’s legendary Après-Ski mile is the textbook way to round off a perfect day in the snow. But if it isn’t downhill skiing that brought you to Kitzbühel, you’ll be delighted with the well-groomed cross-country ski tracks, winter hiking trails, snowshoe routes, horse-drawn sleigh rides and the chance to do a spot of strolling through the pictureperfect old town for a change of scenery. Alongside its sport-orientated opportunities, Kitzbühel’s calendar is packed with standout events, such as the arrival of Advent marking its annual Christmas market

in the idyllic town centre and the New Year’s Eve firework display allowing Kitzbühel to show off its wonderfully romantic side. Events like the famous Hahnenkamm-Rennen and the Snow Polo World Cup see prominent international guests descend on the Chamois City, adding sophistication, glamour and a global presence.The first weekend of Advent heralds the opportunity to check out the pistes, on which ski legends such as Toni Sailer have each claimed gold medals. Held in the town centre, Kitzbühel’s annual Christmas market supplies the essential festive mood, as the aromas of gingerbread, cinnamon, Kletzenbrot fruit bread and punch lace through the festively decked-out stalls. As the kids head to the petting zoo, ride ponies and dive into arts, crafts and baking, visitors can indulge in a spot of gift shop-

ping. Over 700 years’ young, Kitzbühel’s old town can be considered Tyrol’s most attractive ‘outdoor shopping centre’, and more than suitable for a Christmas shop with a touch of Tyrolean charm. Chic highend boutiques such as the Bogner Haus, the Moncler flagship store, Louis Vuitton and Sportalm pose a captivating contrast to the traditional shops with authentic Tyrolean artisanal crafts. In Kitzbühel’s range of eateries, there’s everything from authentic, regional fare to international haute cuisine, with acclaimed top chefs and outstanding delicatessens guaranteeing a flavoursome culinary stay. www.kitzbuehel.com