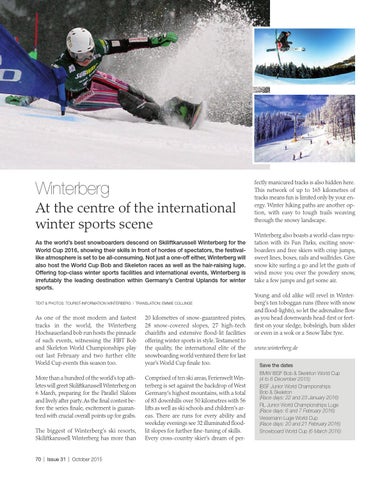 Winterberg At the centre of the international winter sports scene As the world’s best snowboarders descend on Skiliftkarussell Winterberg for the World Cup 2016, showing their skills in front of hordes of spectators, the festivallike atmosphere is set to be all-consuming. Not just a one-off either, Winterberg will also host the World Cup Bob and Skeleton races as well as the hair-raising luge. Offering top-class winter sports facilities and international events, Winterberg is irrefutably the leading destination within Germany’s Central Uplands for winter sports. TEXT & PHOTOS: TOURIST-INFORMATION WINTERBERG | TRANSLATION: EMMIE COLLINGE

As one of the most modern and fastest tracks in the world, the Winterberg Hochsauerland bob run hosts the pinnacle of such events, witnessing the FIBT Bob and Skeleton World Championships play out last February and two further elite World Cup events this season too.

20 kilometres of snow-guaranteed pistes, 28 snow-covered slopes, 27 high-tech chairlifts and extensive flood-lit facilities offering winter sports in style.Testament to the quality, the international elite of the snowboarding world ventured there for last year’s World Cup finale too.

More than a hundred of the world’s top athletes will greet Skiliftkarussell Winterberg on 6 March, preparing for the Parallel Slalom and lively after party. As the final contest before the series finale, excitement is guaranteed with crucial overall points up for grabs.

Comprised of ten ski areas, Ferienwelt Winterberg is set against the backdrop of West Germany’s highest mountains, with a total of 83 downhills over 50 kilometres with 56 lifts as well as ski schools and children’s areas. There are runs for every ability and weekday evenings see 32 illuminated floodlit slopes for further fine-tuning of skills. Every cross-country skier’s dream of per-

The biggest of Winterberg’s ski resorts, Skiliftkarussell Winterberg has more than

fectly manicured tracks is also hidden here. This network of up to 165 kilometres of tracks means fun is limited only by your energy. Winter hiking paths are another option, with easy to tough trails weaving through the snowy landscape. Winterberg also boasts a world-class reputation with its Fun Parks, exciting snowboarders and free skiers with crisp jumps, sweet lines, boxes, rails and wallrides. Give snow kite surfing a go and let the gusts of wind move you over the powdery snow, take a few jumps and get some air. Young and old alike will revel in Winterberg’s ten toboggan runs (three with snow and flood-lights), so let the adrenaline flow as you head downwards head-first or feetfirst on your sledge, bobsleigh, bum slider or even in a wok or a Snow Tube tyre. www.winterberg.de Save the dates BMW IBSF Bob & Skeleton World Cup (4 to 6 December 2015) IBSF Junior World Championships Bob & Skeleton (Race days: 22 and 23 January 2016) FIL Junior World Championships Luge (Race days: 6 and 7 February 2016) Viessmann Luge World Cup (Race days: 20 and 21 February 2016) Snowboard World Cup (6 March 2016)