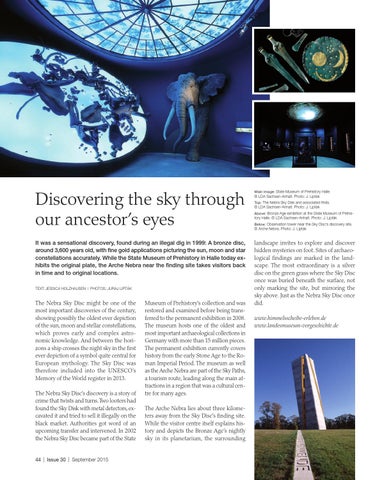 Discovering the sky through our ancestor’s eyes

It was a sensational discovery, found during an illegal dig in 1999: A bronze disc, around 3,600 years old, with fine gold applications picturing the sun, moon and star constellations accurately. While the State Museum of Prehistory in Halle today exhibits the original plate, the Arche Nebra near the finding site takes visitors back in time and to original locations.

landscape invites to explore and discover hidden mysteries on foot. Sites of archaeological findings are marked in the landscape. The most extraordinary is a silver disc on the green grass where the Sky Disc once was buried beneath the surface, not only marking the site, but mirroring the sky above. Just as the Nebra Sky Disc once did.

The Nebra Sky Disc might be one of the most important discoveries of the century, showing possibly the oldest ever depiction of the sun, moon and stellar constellations, which proves early and complex astronomic knowledge. And between the horizons a ship crosses the night sky in the first ever depiction of a symbol quite central for European mythology. The Sky Disc was therefore included into the UNESCO’s Memory of the World register in 2013. The Nebra Sky Disc’s discovery is a story of crime that twists and turns.Two looters had found the Sky Disk with metal detectors, excavated it and tried to sell it illegally on the black market. Authorities got word of an upcoming transfer and intervened. In 2002 the Nebra Sky Disc became part of the State

Museum of Prehistory’s collection and was restored and examined before being transferred to the permanent exhibition in 2008. The museum hosts one of the oldest and most important archaeological collections in Germany with more than 15 million pieces. The permanent exhibition currently covers history from the early Stone Age to the Roman Imperial Period. The museum as well as the Arche Nebra are part of the Sky Paths, a tourism route, leading along the main attractions in a region that was a cultural centre for many ages. The Arche Nebra lies about three kilometers away from the Sky Disc’s finding site. While the visitor centre itself explains history and depicts the Bronze Age’s nightly sky in its planetarium, the surrounding