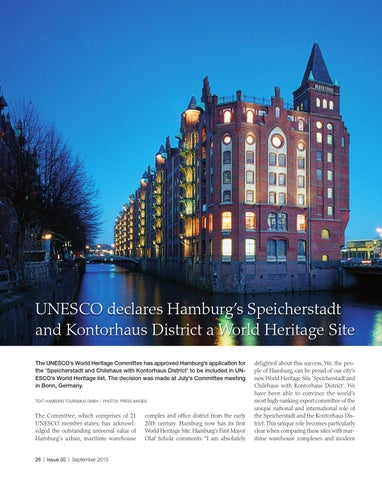 The Committee, which comprises of 21 UNESCO member states, has acknowledged the outstanding universal value of Hamburg’s urban, maritime warehouse

delighted about this success. We, the people of Hamburg, can be proud of our city’s new World Heritage Site 'Speicherstadt and Chilehaus with Kontorhaus District'. We have been able to convince the world’s most high-ranking expert committee of the unique national and international role of the Speicherstadt and the Kontorhaus District. This unique role becomes particularly clear when comparing these sites with maritime warehouse complexes and modern