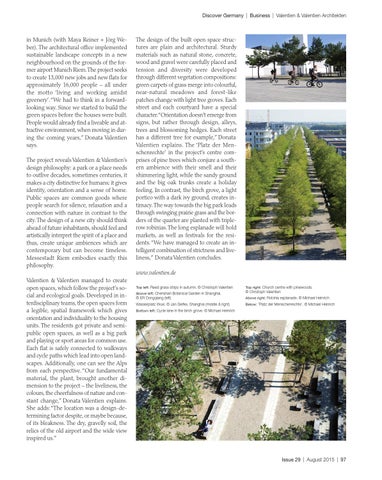 in Munich (with Maya Reiner + Jörg Weber). The architectural office implemented sustainable landscape concepts in a new neighbourhood on the grounds of the former airport Munich Riem.The project seeks to create 13,000 new jobs and new flats for approximately 16,000 people – all under the motto ‘living and working amidst greenery’.“We had to think in a forwardlooking way. Since we started to build the green spaces before the houses were built. People would already find a liveable and attractive environment, when moving in during the coming years,” Donata Valentien says. The project reveals Valentien &amp; Valentien’s design philosophy: a park or a place needs to outlive decades, sometimes centuries, it makes a city distinctive for humans; it gives identity, orientation and a sense of home. Public spaces are common goods where people search for silence, relaxation and a connection with nature in contrast to the city. The design of a new city should think ahead of future inhabitants, should feel and artistically interpret the spirit of a place and thus, create unique ambiences which are contemporary but can become timeless. Messestadt Riem embodies exactly this philosophy.

The design of the built open space structures are plain and architectural. Sturdy materials such as natural stone, concrete, wood and gravel were carefully placed and tension and diversity were developed through different vegetation compositions: green carpets of grass merge into colourful, near-natural meadows and forest-like patches change with light tree groves. Each street and each courtyard have a special character.“Orientation doesn’t emerge from signs, but rather through design, alleys, trees and blossoming hedges. Each street has a different tree for example,” Donata Valentien explains. The ‘Platz der Menschenrechte’ in the project’s centre comprises of pine trees which conjure a southern ambience with their smell and their shimmering light, while the sandy ground and the big oak trunks create a holiday feeling. In contrast, the birch grove, a light portico with a dark ivy ground, creates intimacy. The way towards the big park leads through swinging prairie grass and the borders of the quarter are planted with triplerow robinias. The long esplanade will hold markets, as well as festivals for the residents.“We have managed to create an intelligent combination of strictness and liveliness,” Donata Valentien concludes. www.valentien.de

Valentien &amp; Valentien managed to create open spaces, which follow the project’s social and ecological goals. Developed in interdisciplinary teams, the open spaces form a legible, spatial framework which gives orientation and individuality to the housing units. The residents got private and semipublic open spaces, as well as a big park and playing or sport areas for common use. Each flat is safely connected to walkways and cycle paths which lead into open landscapes. Additionally, one can see the Alps from each perspective. “Our fundamental material, the plant, brought another dimension to the project – the liveliness, the colours, the cheerfulness of nature and constant change,” Donata Valentien explains. She adds: “The location was a design-determining factor despite, or maybe because, of its bleakness. The dry, gravelly soil, the relics of the old airport and the wide view inspired us.”