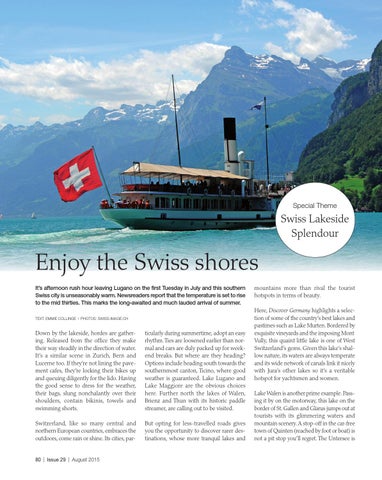 Enjoy the Swiss shores It’s afternoon rush hour leaving Lugano on the first Tuesday in July and this southern Swiss city is unseasonably warm. Newsreaders report that the temperature is set to rise to the mid thirties. This marks the long-awaited and much lauded arrival of summer. TEXT: EMMIE COLLINGE | PHOTOS: SWISS-IMAGE.CH

Down by the lakeside, hordes are gathering. Released from the office they make their way steadily in the direction of water. It’s a similar scene in Zurich, Bern and Lucerne too. If they’re not lining the pavement cafes, they’re locking their bikes up and queuing diligently for the lido. Having the good sense to dress for the weather, their bags, slung nonchalantly over their shoulders, contain bikinis, towels and swimming shorts.

ticularly during summertime, adopt an easy rhythm. Ties are loosened earlier than normal and cars are duly packed up for weekend breaks. But where are they heading? Options include heading south towards the southernmost canton, Ticino, where good weather is guaranteed. Lake Lugano and Lake Maggiore are the obvious choices here. Further north the lakes of Walen, Brienz and Thun with its historic paddle streamer, are calling out to be visited.

Switzerland, like so many central and northern European countries, embraces the outdoors, come rain or shine. Its cities, par-

But opting for less-travelled roads gives you the opportunity to discover rarer destinations, whose more tranquil lakes and

mountains more than rival the tourist hotspots in terms of beauty. Here, Discover Germany highlights a selection of some of the country’s best lakes and pastimes such as Lake Murten. Bordered by exquisite vineyards and the imposing Mont Vully, this quaint little lake is one of West Switzerland’s gems. Given this lake’s shallow nature, its waters are always temperate and its wide network of canals link it nicely with Jura’s other lakes so it’s a veritable hotspot for yachtsmen and women. Lake Walen is another prime example. Passing it by on the motorway, this lake on the border of St. Gallen and Glarus jumps out at tourists with its glimmering waters and mountain scenery. A stop-off in the car-free town of Quinten (reached by foot or boat) is not a pit stop you’ll regret. The Untersee is