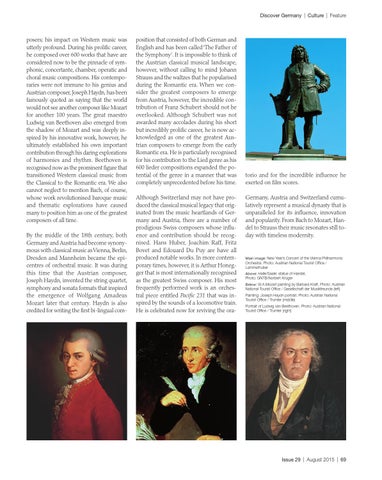 posers; his impact on Western music was utterly profound. During his prolific career, he composed over 600 works that have are considered now to be the pinnacle of symphonic, concertante, chamber, operatic and choral music compositions. His contemporaries were not immune to his genius and Austrian composer, Joseph Haydn, has been famously quoted as saying that the world would not see another composer like Mozart for another 100 years. The great maestro Ludwig van Beethoven also emerged from the shadow of Mozart and was deeply inspired by his innovative work, however, he ultimately established his own important contribution through his daring explorations of harmonies and rhythm. Beethoven is recognised now as the prominent figure that transitioned Western classical music from the Classical to the Romantic era. We also cannot neglect to mention Bach, of course, whose work revolutionised baroque music and thematic explorations have caused many to position him as one of the greatest composers of all time. By the middle of the 18th century, both Germany and Austria had become synonymous with classical music asVienna, Berlin, Dresden and Mannheim became the epicentres of orchestral music. It was during this time that the Austrian composer, Joseph Haydn, invented the string quartet, symphony and sonata formats that inspired the emergence of Wolfgang Amadeus Mozart later that century. Haydn is also credited for writing the first bi-lingual com-

position that consisted of both German and English and has been called â&amp;#x20AC;&amp;#x2DC;The Father of the Symphony&#39;. It is impossible to think of the Austrian classical musical landscape, however, without calling to mind Johann Strauss and the waltzes that he popularised during the Romantic era. When we consider the greatest composers to emerge from Austria, however, the incredible contribution of Franz Schubert should not be overlooked. Although Schubert was not awarded many accolades during his short but incredibly prolific career, he is now acknowledged as one of the greatest Austrian composers to emerge from the early Romantic era. He is particularly recognised for his contribution to the Lied genre as his 600 lieder compositions expanded the potential of the genre in a manner that was completely unprecedented before his time. Although Switzerland may not have produced the classical musical legacy that originated from the music heartlands of Germany and Austria, there are a number of prodigious Swiss composers whose influence and contribution should be recognised. Hans Huber, Joachim Raff, Fritz Bovet and Edouard Du Puy are have all produced notable works. In more contemporary times, however, it is Arthur Honegger that is most internationally recognised as the greatest Swiss composer. His most frequently performed work is an orchestral piece entitled Pacific 231 that was inspired by the sounds of a locomotive train. He is celebrated now for reviving the ora-

torio and for the incredible influence he exerted on film scores. Germany, Austria and Switzerland cumulatively represent a musical dynasty that is unparalleled for its influence, innovation and popularity. From Bach to Mozart, Handel to Strauss their music resonates still today with timeless modernity.