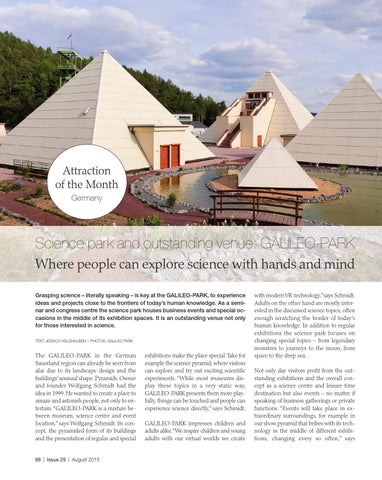 Science park and outstanding venue: GALILEO-PARK Where people can explore science with hands and mind Grasping science – literally speaking – is key at the GALILEO-PARK, to experience ideas and projects close to the frontiers of today’s human knowledge. As a seminar and congress centre the science park houses business events and special occasions in the middle of its exhibition spaces. It is an outstanding venue not only for those interested in science. TEXT: JESSICA HOLZHAUSEN | PHOTOS: GALILEO PARK

The GALILEO-PARK in the German Sauerland region can already be seen from afar due to its landscape design and the buildings’unusual shape: Pyramids. Owner and founder Wolfgang Schmidt had the idea in 1999. He wanted to create a place to amaze and astonish people, not only to entertain.“GALILEO-PARK is a mixture between museum, science centre and event location,”says Wolfgang Schmidt. Its concept, the pyramided form of its buildings and the presentation of regular and special

exhibitions make the place special.Take for example the science pyramid, where visitors can explore and try out exciting scientific experiments. “While most museums display these topics in a very static way, GALILEO-PARK presents them more playfully, things can be touched and people can experience science directly,”says Schmidt. GALILEO-PARK impresses children and adults alike.“We inspire children and young adults with our virtual worlds we create

with modernVR-technology,”says Schmidt. Adults on the other hand are mostly interested in the discussed science topics, often enough scratching the border of today’s human knowledge. In addition to regular exhibitions the science park focuses on changing special topics – from legendary monsters to journeys to the moon, from space to the deep sea. Not only day visitors profit from the outstanding exhibitions and the overall concept as a science centre and leisure time destination but also events – no matter if speaking of business gatherings or private functions. “Events will take place in extraordinary surroundings, for example in our show pyramid that bribes with its technology in the middle of different exhibitions, changing every so often,” says