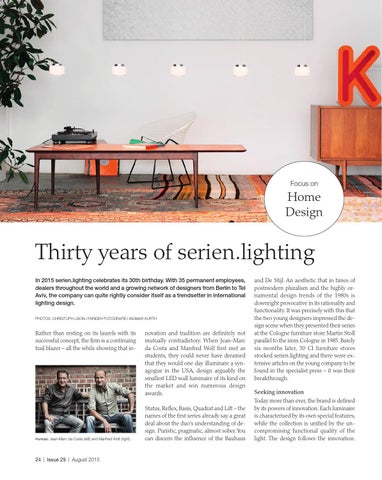 Thirty years of serien.lighting In 2015 serien.lighting celebrates its 30th birthday. With 35 permanent employees, dealers throughout the world and a growing network of designers from Berlin to Tel Aviv, the company can quite rightly consider itself as a trendsetter in international lighting design. PHOTOS: CHRISTOPH LISON I FARIDEH FOTOGRAFIE I INGMAR KURTH

Rather than resting on its laurels with its successful concept, the firm is a continuing trail blazer – all the while showing that in-

novation and tradition are definitely not mutually contradictory. When Jean-Marc da Costa and Manfred Wolf first met as students, they could never have dreamed that they would one day illuminate a synagogue in the USA, design arguably the smallest LED wall luminaire of its kind on the market and win numerous design awards. Status, Reflex, Basis, Quadrat and Lift – the names of the first series already say a great deal about the duo’s understanding of design. Puristic, pragmatic, almost sober.You can discern the influence of the Bauhaus

and De Stijl. An aesthetic that in times of postmodern pluralism and the highly ornamental design trends of the 1980s is downright provocative in its rationality and functionality. It was precisely with this that the two young designers impressed the design scene when they presented their series at the Cologne furniture store Martin Stoll parallel to the imm Cologne in 1985. Barely six months later, 30 CI furniture stores stocked serien.lighting and there were extensive articles on the young company to be found in the specialist press – it was their breakthrough. Seeking innovation Today more than ever, the brand is defined by its powers of innovation. Each luminaire is characterised by its own special features, while the collection is unified by the uncompromising functional quality of the light. The design follows the innovation.