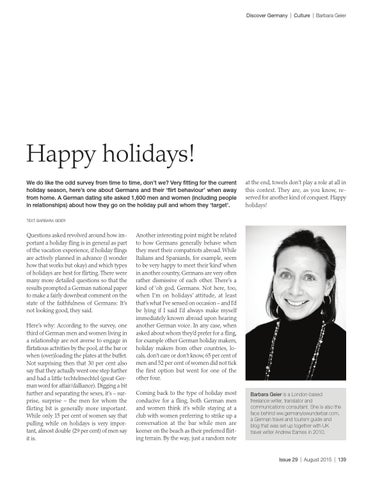 Happy holidays! We do like the odd survey from time to time, don’t we? Very fitting for the current holiday season, here’s one about Germans and their ‘flirt behaviour’ when away from home. A German dating site asked 1,600 men and women (including people in relationships) about how they go on the holiday pull and whom they ‘target’.

at the end, towels don’t play a role at all in this context. They are, as you know, reserved for another kind of conquest. Happy holidays!

Questions asked revolved around how important a holiday fling is in general as part of the vacation experience, if holiday flings are actively planned in advance (I wonder how that works but okay) and which types of holidays are best for flirting. There were many more detailed questions so that the results prompted a German national paper to make a fairly downbeat comment on the state of the faithfulness of Germans: It’s not looking good, they said. Here’s why: According to the survey, one third of German men and women living in a relationship are not averse to engage in flirtatious activities by the pool, at the bar or when (over)loading the plates at the buffet. Not surprising then that 30 per cent also say that they actually went one step further and had a little techtelmechtel (great German word for affair/dalliance). Digging a bit further and separating the sexes, it’s – surprise, surprise – the men for whom the flirting bit is generally more important. While only 15 per cent of women say that pulling while on holidays is very important, almost double (29 per cent) of men say it is.

Another interesting point might be related to how Germans generally behave when they meet their compatriots abroad. While Italians and Spaniards, for example, seem to be very happy to meet their ‘kind’ when in another country, Germans are very often rather dismissive of each other. There’s a kind of ‘oh god, Germans. Not here, too, when I’m on holidays’ attitude, at least that’s what I’ve sensed on occasion – and I’d be lying if I said I’d always make myself immediately known abroad upon hearing another German voice. In any case, when asked about whom they’d prefer for a fling, for example other German holiday makers, holiday makers from other countries, locals, don’t care or don’t know, 65 per cent of men and 52 per cent of women did not tick the first option but went for one of the other four. Coming back to the type of holiday most conducive for a fling, both German men and women think it’s while staying at a club with women preferring to strike up a conversation at the bar while men are keener on the beach as their preferred flirting terrain. By the way, just a random note