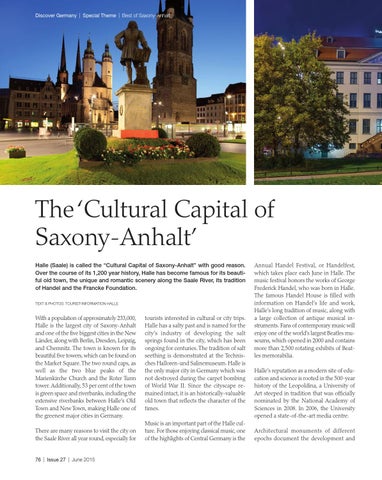 With a population of approximately 233,000, Halle is the largest city of Saxony-Anhalt and one of the five biggest cities in the New Länder, along with Berlin, Dresden, Leipzig, and Chemnitz. The town is known for its beautiful five towers, which can be found on the Market Square. The two round caps, as well as the two blue peaks of the Marienkirche Church and the Roter Turm tower. Additionally, 53 per cent of the town is green space and riverbanks, including the extensive riverbanks between Halle’s Old Town and New Town, making Halle one of the greenest major cities in Germany. There are many reasons to visit the city on the Saale River all year round, especially for

tourists interested in cultural or city trips. Halle has a salty past and is named for the city’s industry of developing the salt springs found in the city, which has been ongoing for centuries. The tradition of salt seething is demonstrated at the Technisches Halloren-und Salinemuseum. Halle is the only major city in Germany which was not destroyed during the carpet bombing of World War II. Since the cityscape remained intact, it is an historically-valuable old town that reflects the character of the times. Music is an important part of the Halle culture. For those enjoying classical music, one of the highlights of Central Germany is the

Annual Handel Festival, or Handelfest, which takes place each June in Halle. The music festival honors the works of George Frederick Handel, who was born in Halle. The famous Handel House is filled with information on Handel’s life and work, Halle’s long tradition of music, along with a large collection of antique musical instruments. Fans of contemporary music will enjoy one of the world’s largest Beatles museums, which opened in 2000 and contains more than 2,500 rotating exhibits of Beatles memorabilia. Halle’s reputation as a modern site of education and science is rooted in the 500-year history of the Leopoldina, a University of Art steeped in tradition that was officially nominated by the National Academy of Sciences in 2008. In 2006, the University opened a state-of-the-art media centre. Architectural monuments of different epochs document the development and