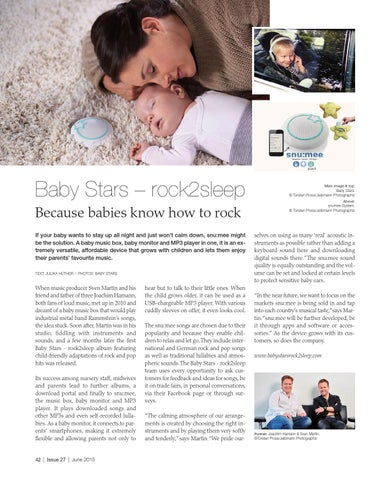 Baby Stars – rock2sleep Because babies know how to rock If your baby wants to stay up all night and just won’t calm down, snu:mee might be the solution. A baby music box, baby monitor and MP3 player in one, it is an extremely versatile, affordable device that grows with children and lets them enjoy their parents’ favourite music. TEXT: JULIKA HÜTHER | PHOTOS: BABY STARS

When music producer Sven Martin and his friend and father of three Joachim Hamann, both fans of loud music, met up in 2010 and dreamt of a baby music box that would play industrial metal band Rammstein’s songs, the idea stuck. Soon after, Martin was in his studio, fiddling with instruments and sounds, and a few months later the first Baby Stars - rock2sleep album featuring child-friendly adaptations of rock and pop hits was released. Its success among nursery staff, midwives and parents lead to further albums, a download portal and finally to snu:mee, the music box, baby monitor and MP3 player. It plays downloaded songs and other MP3s and even self-recorded lullabies. As a baby monitor, it connects to parents’ smartphones, making it extremely flexible and allowing parents not only to

hear but to talk to their little ones. When the child grows older, it can be used as a USB-chargeable MP3 player. With various cuddly sleeves on offer, it even looks cool. The snu:mee songs are chosen due to their popularity and because they enable children to relax and let go.They include international and German rock and pop songs as well as traditional lullabies and atmospheric sounds. The Baby Stars - rock2sleep team uses every opportunity to ask customers for feedback and ideas for songs, be it on trade fairs, in personal conversations, via their Facebook page or through surveys. “The calming atmosphere of our arrangements is created by choosing the right instruments and by playing them very softly and tenderly,”says Martin.“We pride our-

selves on using as many 'real' acoustic instruments as possible rather than adding a keyboard sound here and downloading digital sounds there.”The snu:mee sound quality is equally outstanding and the volume can be set and locked at certain levels to protect sensitive baby ears. “In the near future, we want to focus on the markets snu:mee is being sold in and tap into each country’s musical taste,”says Martin.“snu:mee will be further developed, be it through apps and software or accessories.” As the device grows with its customers, so does the company. www.babystarsrock2sleep.com