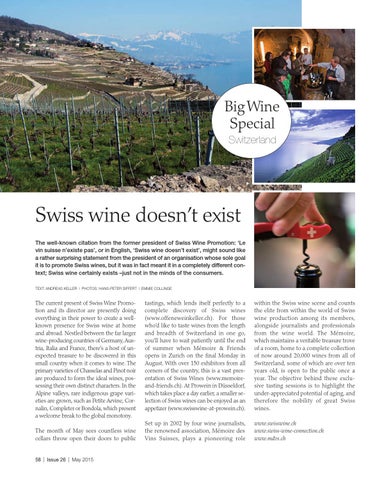 Swiss wine doesn’t exist The well-known citation from the former president of Swiss Wine Promotion: ‘Le vin suisse n’existe pas’, or in English, ‘Swiss wine doesn’t exist’, might sound like a rather surprising statement from the president of an organisation whose sole goal it is to promote Swiss wines, but it was in fact meant it in a completely different context; Swiss wine certainly exists –just not in the minds of the consumers. TEXT: ANDREAS KELLER | PHOTOS: HANS-PETER SIFFERT | EMMIE COLLINGE

The current present of Swiss Wine Promotion and its director are presently doing everything in their power to create a wellknown presence for Swiss wine at home and abroad. Nestled between the far larger wine-producing countries of Germany, Austria, Italia and France, there’s a host of unexpected treasure to be discovered in this small country when it comes to wine. The primary varieties of Chasselas and Pinot noir are produced to form the ideal wines, possessing their own distinct characters. In the Alpine valleys, rare indigenous grape varieties are grown, such as Petite Arvine, Cornalin, Completer or Bondola, which present a welcome break to the global monotony. The month of May sees countless wine cellars throw open their doors to public

tastings, which lends itself perfectly to a complete discovery of Swiss wines (www.offeneweinkeller.ch). For those who’d like to taste wines from the length and breadth of Switzerland in one go, you’ll have to wait patiently until the end of summer when Mémoire & Friends opens in Zurich on the final Monday in August. With over 150 exhibitors from all corners of the country, this is a vast presentation of Swiss Wines (www.memoireand-friends.ch). At Prowein in Düsseldorf, which takes place a day earlier, a smaller selection of Swiss wines can be enjoyed as an appetizer (www.swisswine-at-prowein.ch).

within the Swiss wine scene and counts the elite from within the world of Swiss wine production among its members, alongside journalists and professionals from the wine world. The Mémoire, which maintains a veritable treasure trove of a room, home to a complete collection of now around 20,000 wines from all of Switzerland, some of which are over ten years old, is open to the public once a year. The objective behind these exclusive tasting sessions is to highlight the under-appreciated potential of aging, and therefore the nobility of great Swiss wines.