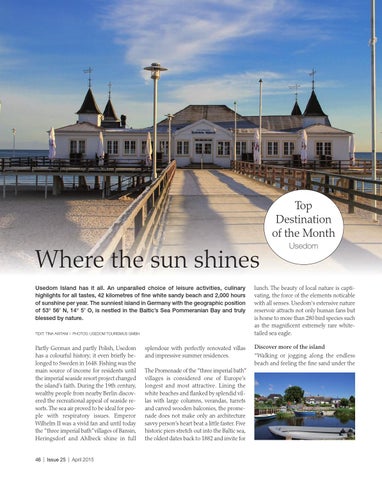 Top Destination of the Month

Where the sun shines Usedom Island has it all. An unparalled choice of leisure activities, culinary highlights for all tastes, 42 kilometres of fine white sandy beach and 2,000 hours of sunshine per year. The sunniest island in Germany with the geographic position of 53° 56’ N, 14° 5’ O, is nestled in the Baltic’s Sea Pommeranian Bay and truly blessed by nature. TEXT: TINA AWTANI | PHOTOS: USEDOM TOURISMUS GMBH

Partly German and partly Polish, Usedom has a colourful history; it even briefly belonged to Sweden in 1648. Fishing was the main source of income for residents until the imperial seaside resort project changed the island’s faith. During the 19th century, wealthy people from nearby Berlin discovered the recreational appeal of seaside resorts. The sea air proved to be ideal for people with respiratory issues. Emperor Wilhelm II was a vivid fan and until today the ”three imperial bath”villages of Bansin, Heringsdorf and Ahlbeck shine in full

splendour with perfectly renovated villas and impressive summer residences. The Promenade of the ”three imperial bath” villages is considered one of Europe’s longest and most attractive. Lining the white beaches and flanked by splendid villas with large columns, verandas, turrets and carved wooden balconies, the promenade does not make only an architecture savvy person’s heart beat a little faster. Five historic piers stretch out into the Baltic sea, the oldest dates back to 1882 and invite for

lunch. The beauty of local nature is captivating, the force of the elements noticable with all senses. Usedom's extensive nature reservoir attracts not only human fans but is home to more than 280 bird species such as the magnificent extremely rare whitetailed sea eagle. Discover more of the island “Walking or jogging along the endless beach and feeling the fine sand under the