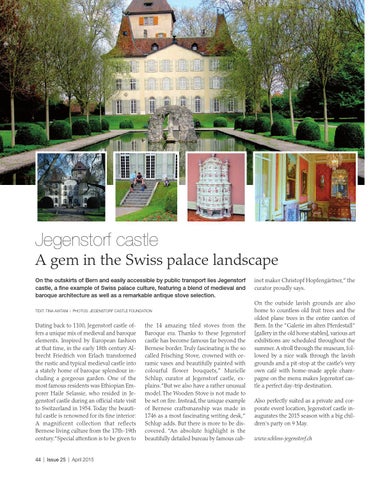 Jegenstorf castle A gem in the Swiss palace landscape On the outskirts of Bern and easily accessible by public transport lies Jegenstorf castle, a fine example of Swiss palace culture, featuring a blend of medieval and baroque architecture as well as a remarkable antique stove selection. TEXT: TINA AWTANI | PHOTOS: JEGENSTORF CASTLE FOUNDATION

Dating back to 1100, Jegenstorf castle offers a unique mix of medieval and baroque elements. Inspired by European fashion at that time, in the early 18th century Albrecht Friedrich von Erlach transformed the rustic and typical medieval castle into a stately home of baroque splendour including a gorgeous garden. One of the most famous residents was Ethiopian Emporer Haile Selassie, who resided in Jegenstorf castle during an official state visit to Switzerland in 1954. Today the beautiful castle is renowned for its fine interior: A magnificent collection that reflects Bernese living culture from the 17th-19th century.“Special attention is to be given to

the 14 amazing tiled stoves from the Baroque era. Thanks to these Jegenstorf castle has become famous far beyond the Bernese border. Truly fascinating is the so called Frisching Stove, crowned with ceramic vases and beautifully painted with colourful flower bouquets,” Murielle Schlup, curator at Jegenstorf castle, explains.“But we also have a rather unusual model. The Wooden Stove is not made to be set on fire. Instead, the unique example of Bernese craftsmanship was made in 1746 as a most fascinating writing desk,“ Schlup adds. But there is more to be discovered. “An absolute highlight is the beautifully detailed bureau by famous cab-

inet maker Christopf Hopfengärtner,“ the curator proudly says. On the outside lavish grounds are also home to countless old fruit trees and the oldest plane trees in the entire canton of Bern. In the "Galerie im alten Pferdestall" [gallery in the old horse stables], various art exhibitions are scheduled throughout the summer. A stroll through the museum, followed by a nice walk through the lavish grounds and a pit-stop at the castle’s very own café with home-made apple champagne on the menu makes Jegenstorf castle a perfect day-trip destination. Also perfectly suited as a private and corporate event location, Jegenstorf castle inaugurates the 2015 season with a big children's party on 9 May. www.schloss-jegenstorf.ch