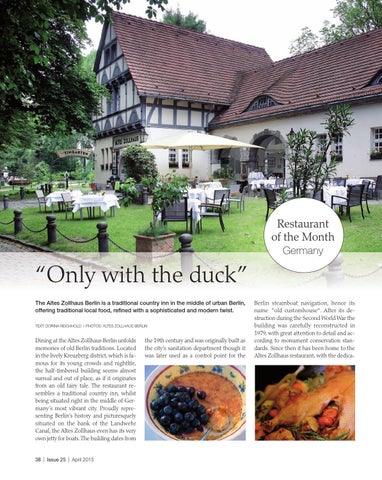 Restaurant of the Month Germany

“Only with the duck” The Altes Zollhaus Berlin is a traditional country inn in the middle of urban Berlin, offering traditional local food, refined with a sophisticated and modern twist. TEXT: DORINA REICHHOLD | PHOTOS: ALTES ZOLLHAUS BERLIN

Dining at the Altes Zollhaus Berlin unfolds memories of old Berlin traditions. Located in the lively Kreuzberg district, which is famous for its young crowds and nightlife, the half-timbered building seems almost surreal and out of place, as if it originates from an old fairy tale. The restaurant resembles a traditional country inn, whilst being situated right in the middle of Germany´s most vibrant city. Proudly representing Berlin’s history and picturesquely situated on the bank of the Landwehr Canal, the Altes Zollhaus even has its very own jetty for boats.The building dates from

Berlin steamboat navigation, hence its name “old customhouse“. After its destruction during the Second World War the building was carefully reconstructed in 1979, with great attention to detail and according to monument conservation standards. Since then it has been home to the Altes Zollhaus restaurant, with the dedica-