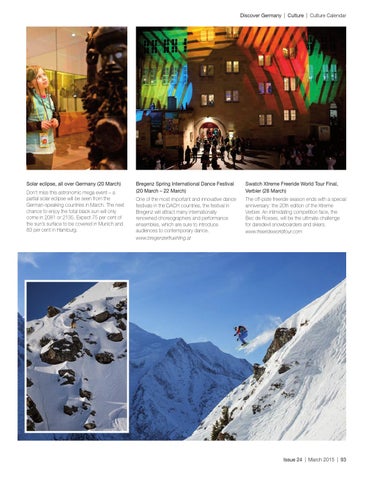 Solar eclipse, all over Germany (20 March) Don’t miss this astronomic mega event – a partial solar eclipse will be seen from the German-speaking countries in March. The next chance to enjoy the total black sun will only come in 2081 or 2135. Expect 75 per cent of the sun’s surface to be covered in Munich and 83 per cent in Hamburg.

One of the most important and innovative dance festivals in the DACH countries, the festival in Bregenz will attract many internationally renowned choreographers and performance ensembles, which are sure to introduce audiences to contemporary dance. www.bregenzerfruehling.at

The off-piste freeride season ends with a special anniversary: the 20th edition of the Xtreme Verbier. An intimidating competition face, the Bec de Rosses, will be the ultimate challenge for daredevil snowboarders and skiers. www.freerideworldtour.com