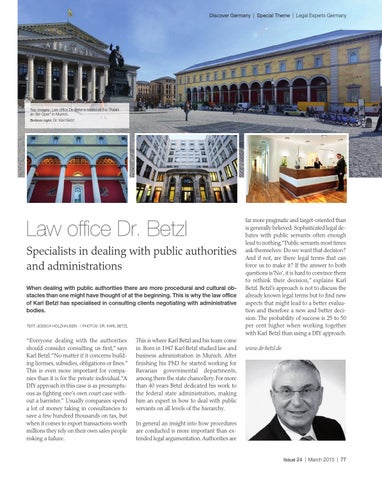 Law office Dr. Betzl Specialists in dealing with public authorities and administrations When dealing with public authorities there are more procedural and cultural obstacles than one might have thought of at the beginning. This is why the law office of Karl Betzl has specialised in consulting clients negotiating with administrative bodies. TEXT: JESSICA HOLZHAUSEN | PHOTOS: DR. KARL BETZL

“Everyone dealing with the authorities should consider consulting us first,” says Karl Betzl.“No matter if it concerns building licenses, subsidies, obligations or fines.” This is even more important for companies than it is for the private individual.“A DIY approach in this case is as presumptuous as fighting one’s own court case without a barrister.” Usually companies spend a lot of money taking in consultancies to save a few hundred thousands on tax, but when it comes to export transactions worth millions they rely on their own sales people risking a failure.

This is where Karl Betzl and his team come in. Born in 1947 Karl Betzl studied law and business administration in Munich. After finishing his PhD he started working for Bavarian governmental departments, among them the state chancellery. For more than 40 years Betzl dedicated his work to the federal state administration, making him an expert in how to deal with public servants on all levels of the hierarchy.

far more pragmatic and target-oriented than is generally believed. Sophisticated legal debates with public servants often enough lead to nothing.“Public servants most times ask themselves: Do we want that decision? And if not, are there legal terms that can force us to make it? If the answer to both questions is‘No’, it is hard to convince them to rethink their decision,” explains Karl Betzl. Betzl’s approach is not to discuss the already known legal terms but to find new aspects that might lead to a better evaluation and therefore a new and better decision. The probability of success is 25 to 50 per cent higher when working together with Karl Betzl than using a DIY approach. www.dr-betzl.de

In general an insight into how procedures are conducted is more important than extended legal argumentation. Authorities are