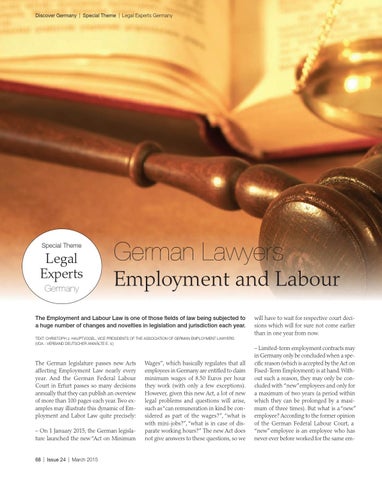 The Employment and Labour Law is one of those fields of law being subjected to a huge number of changes and novelties in legislation and jurisdiction each year.

will have to wait for respective court decisions which will for sure not come earlier than in one year from now.

The German legislature passes new Acts affecting Employment Law nearly every year. And the German Federal Labour Court in Erfurt passes so many decisions annually that they can publish an overview of more than 100 pages each year. Two examples may illustrate this dynamic of Employment and Labor Law quite precisely: – On 1 January 2015, the German legislature launched the new “Act on Minimum

Wages”, which basically regulates that all employees in Germany are entitled to claim minimum wages of 8.50 Euros per hour they work (with only a few exceptions). However, given this new Act, a lot of new legal problems and questions will arise, such as“can remuneration in kind be considered as part of the wages?”, “what is with mini-jobs?”, “what is in case of disparate working hours?” The new Act does not give answers to these questions, so we

– Limited-term employment contracts may in Germany only be concluded when a specific reason (which is accepted by the Act on Fixed-Term Employment) is at hand. Without such a reason, they may only be concluded with “new”employees and only for a maximum of two years (a period within which they can be prolonged by a maximum of three times). But what is a “new” employee? According to the former opinion of the German Federal Labour Court, a “new” employee is an employee who has never ever before worked for the same em-