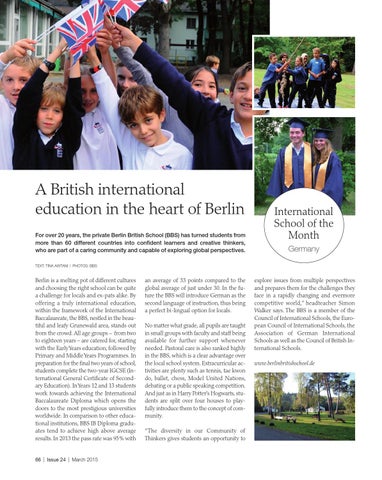 A British international education in the heart of Berlin For over 20 years, the private Berlin British School (BBS) has turned students from more than 60 different countries into confident learners and creative thinkers, who are part of a caring community and capable of exploring global perspectives.

International School of the Month Germany

Berlin is a melting pot of different cultures and choosing the right school can be quite a challenge for locals and ex-pats alike. By offering a truly international education, within the framework of the International Baccalaureate, the BBS, nestled in the beautiful and leafy Grunewald area, stands out from the crowd. All age groups – from two to eighteen years – are catered for, starting with the EarlyYears education, followed by Primary and Middle Years Programmes. In preparation for the final two years of school, students complete the two-year IGCSE (International General Certificate of Secondary Education). InYears 12 and 13 students work towards achieving the International Baccalaureate Diploma which opens the doors to the most prestigious universities worldwide. In comparison to other educational institutions, BBS IB Diploma graduates tend to achieve high above average results. In 2013 the pass rate was 95% with

an average of 33 points compared to the global average of just under 30. In the future the BBS will introduce German as the second language of instruction, thus being a perfect bi-lingual option for locals. No matter what grade, all pupils are taught in small groups with faculty and staff being available for further support whenever needed. Pastoral care is also ranked highly in the BBS, which is a clear advantage over the local school system. Extracurricular activities are plenty such as tennis, tae kwon do, ballet, chess, Model United Nations, debating or a public speaking competition. And just as in Harry Potter’s Hogwarts, students are split over four houses to playfully introduce them to the concept of community. “The diversity in our Community of Thinkers gives students an opportunity to