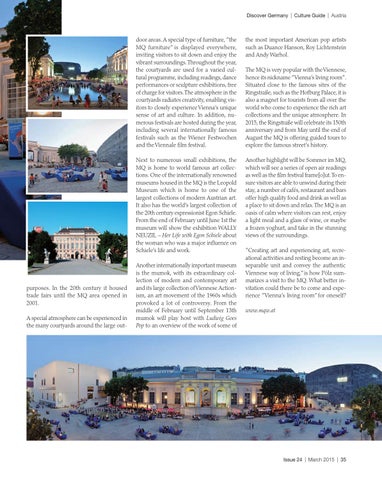 door areas. A special type of furniture, ”the MQ furniture” is displayed everywhere, inviting visitors to sit down and enjoy the vibrant surroundings.Throughout the year, the courtyards are used for a varied cultural programme, including readings, dance performances or sculpture exhibitions, free of charge for visitors.The atmosphere in the courtyards radiates creativity, enabling visitors to closely experience Vienna’s unique sense of art and culture. In addition, numerous festivals are hosted during the year, including several internationally famous festivals such as the Wiener Festwochen and the Viennale film festival. Next to numerous small exhibitions, the MQ is home to world famous art collections. One of the internationally renowned museums housed in the MQ is the Leopold Museum which is home to one of the largest collections of modern Austrian art. It also has the world’s largest collection of the 20th century expressionist Egon Schiele. From the end of February until June 1st the museum will show the exhibition WALLY NEUZIL – Her Life with Egon Schiele about the woman who was a major influence on Schiele’s life and work.

purposes. In the 20th century it housed trade fairs until the MQ area opened in 2001. A special atmosphere can be experienced in the many courtyards around the large out-

Another internationally important museum is the mumok, with its extraordinary collection of modern and contemporary art and its large collection ofViennese Actionism, an art movement of the 1960s which provoked a lot of controversy. From the middle of February until September 13th mumok will play host with Ludwig Goes Pop to an overview of the work of some of

the most important American pop artists such as Duance Hanson, Roy Lichtenstein and Andy Warhol. The MQ is very popular with theViennese, hence its nickname ”Vienna’s living room”. Situated close to the famous sites of the Ringstraße, such as the Hofburg Palace, it is also a magnet for tourists from all over the world who come to experience the rich art collections and the unique atmosphere. In 2015, the Ringstraße will celebrate its 150th anniversary and from May until the end of August the MQ is offering guided tours to explore the famous street’s history. Another highlight will be Sommer im MQ, which will see a series of open air readings as well as the film festival frame[o]ut.To ensure visitors are able to unwind during their stay, a number of cafés, restaurant and bars offer high quality food and drink as well as a place to sit down and relax. The MQ is an oasis of calm where visitors can rest, enjoy a light meal and a glass of wine, or maybe a frozen yoghurt, and take in the stunning views of the surroundings. ”Creating art and experiencing art, recreational activities and resting become an inseparable unit and convey the authentic Viennese way of living,”is how Pölz summarizes a visit to the MQ. What better invitation could there be to come and experience ”Vienna’s living room” for oneself? www.mqw.at