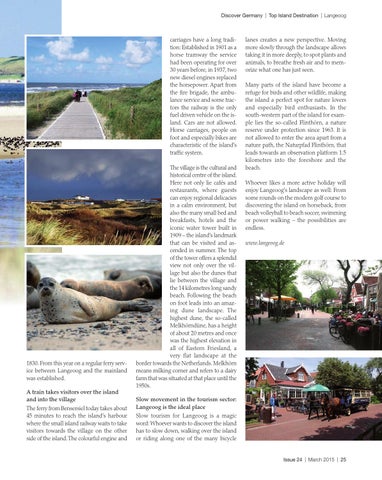 carriages have a long tradition: Established in 1901 as a horse tramway the service had been operating for over 30 years before, in 1937, two new diesel engines replaced the horsepower. Apart from the fire brigade, the ambulance service and some tractors the railway is the only fuel driven vehicle on the island. Cars are not allowed. Horse carriages, people on foot and especially bikes are characteristic of the island’s traffic system.

1830. From this year on a regular ferry service between Langeoog and the mainland was established. A train takes visitors over the island and into the village The ferry from Bensersiel today takes about 45 minutes to reach the island’s harbour where the small island railway waits to take visitors towards the village on the other side of the island.The colourful engine and

The village is the cultural and historical centre of the island. Here not only lie cafés and restaurants, where guests can enjoy regional delicacies in a calm environment, but also the many small bed and breakfasts, hotels and the iconic water tower built in 1909 – the island’s landmark that can be visited and ascended in summer. The top of the tower offers a splendid view not only over the village but also the dunes that lie between the village and the 14 kilometres long sandy beach. Following the beach on foot leads into an amazing dune landscape. The highest dune, the so-called Melkhörndüne, has a height of about 20 metres and once was the highest elevation in all of Eastern Friesland, a very flat landscape at the border towards the Netherlands. Melkhörn means milking corner and refers to a dairy farm that was situated at that place until the 1950s.

lanes creates a new perspective. Moving more slowly through the landscape allows taking it in more deeply, to spot plants and animals, to breathe fresh air and to memorize what one has just seen. Many parts of the island have become a refuge for birds and other wildlife, making the island a perfect spot for nature lovers and especially bird enthusiasts. In the south-western part of the island for example lies the so-called Flinthörn, a nature reserve under protection since 1963. It is not allowed to enter the area apart from a nature path, the Naturpfad Flinthörn, that leads towards an observation platform 1.5 kilometres into the foreshore and the beach. Whoever likes a more active holiday will enjoy Langeoog’s landscape as well: From some rounds on the modern golf course to discovering the island on horseback, from beach volleyball to beach soccer, swimming or power walking – the possibilities are endless. www.langeoog.de