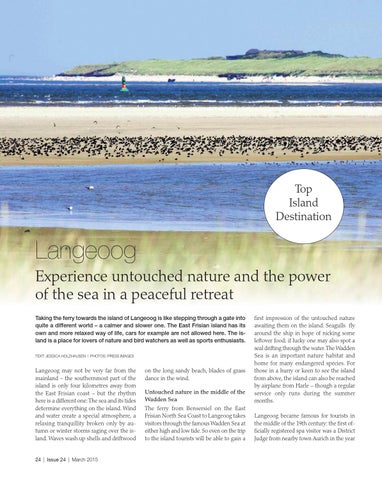 Langeoog Experience untouched nature and the power of the sea in a peaceful retreat Taking the ferry towards the island of Langeoog is like stepping through a gate into quite a different world – a calmer and slower one. The East Frisian island has its own and more relaxed way of life, cars for example are not allowed here. The island is a place for lovers of nature and bird watchers as well as sports enthusiasts.

Untouched nature in the middle of the Wadden Sea

first impression of the untouched nature awaiting them on the island. Seagulls fly around the ship in hope of nicking some leftover food; if lucky one may also spot a seal drifting through the water.The Wadden Sea is an important nature habitat and home for many endangered species. For those in a hurry or keen to see the island from above, the island can also be reached by airplane from Harle – though a regular service only runs during the summer months.

The ferry from Bensersiel on the East Frisian North Sea Coast to Langeoog takes visitors through the famous Wadden Sea at either high and low tide. So even on the trip to the island tourists will be able to gain a

Langeoog became famous for tourists in the middle of the 19th century: the first officially registered spa visitor was a District Judge from nearby town Aurich in the year

Langeoog may not be very far from the mainland – the southernmost part of the island is only four kilometres away from the East Frisian coast – but the rhythm here is a different one: The sea and its tides determine everything on the island. Wind and water create a special atmosphere, a relaxing tranquillity broken only by autumn or winter storms raging over the island. Waves wash up shells and driftwood

on the long sandy beach, blades of grass dance in the wind.