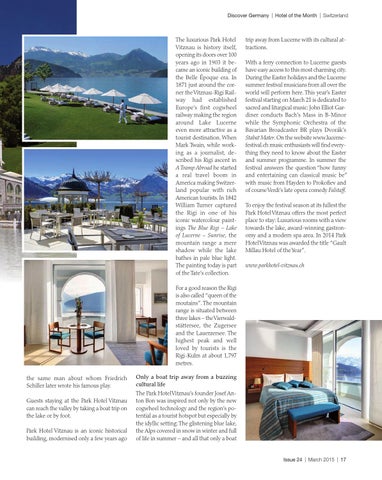 The luxurious Park Hotel Vitznau is history itself, opening its doors over 100 years ago in 1903 it became an iconic building of the Belle Époque era. In 1871 just around the corner the Vitznau-Rigi Railway had established Europe’s first cogwheel railway making the region around Lake Lucerne even more attractive as a tourist destination. When Mark Twain, while working as a journalist, described his Rigi ascent in A Tramp Abroad he started a real travel boom in America making Switzerland popular with rich American tourists. In 1842 William Turner captured the Rigi in one of his iconic watercolour paintings The Blue Rigi – Lake of Lucerne – Sunrise, the mountain range a mere shadow while the lake bathes in pale blue light. The painting today is part of the Tate’s collection.

trip away from Lucerne with its cultural attractions. With a ferry connection to Lucerne guests have easy access to this most charming city. During the Easter holidays and the Lucerne summer festival musicians from all over the world will perform here. This year’s Easter festival starting on March 21 is dedicated to sacred and liturgical music: John Elliot Gardiner conducts Bach’s Mass in B-Minor while the Symphonic Orchestra of the Bavarian Broadcaster BR plays Dvorák’s Stabat Mater. On the website www.lucernefestival.ch music enthusiasts will find everything they need to know about the Easter and summer programme. In summer the festival answers the question “how funny and entertaining can classical music be” with music from Hayden to Prokofiev and of courseVerdi’s late opera comedy Falstaff. To enjoy the festival season at its fullest the Park Hotel Vitznau offers the most perfect place to stay: Luxurious rooms with a view towards the lake, award-winning gastronomy and a modern spa area. In 2014 Park HotelVitznau was awarded the title “Gault Millau Hotel of theYear”. www.parkhotel-vitznau.ch

For a good reason the Rigi is also called “queen of the moutains”. The mountain range is situated between three lakes – theVierwaldstättersee, the Zugersee and the Lauerzersee. The highest peak and well loved by tourists is the Rigi-Kulm at about 1,797 metres. the same man about whom Friedrich Schiller later wrote his famous play. Guests staying at the Park Hotel Vitznau can reach the valley by taking a boat trip on the lake or by foot. Park Hotel Vitznau is an iconic historical building, modernised only a few years ago

Only a boat trip away from a buzzing cultural life The Park HotelVitznau’s founder Josef Anton Bon was inspired not only by the new cogwheel technology and the region’s potential as a tourist hotspot but especially by the idyllic setting: The glistening blue lake, the Alps covered in snow in winter and full of life in summer – and all that only a boat