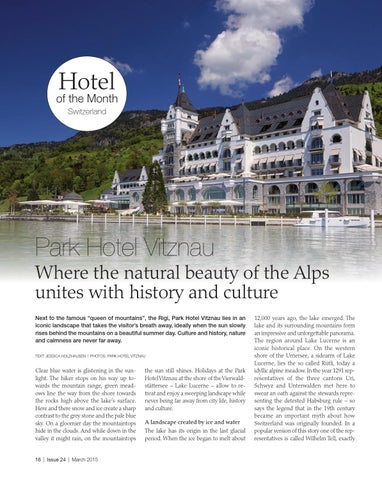 of the Month Switzerland

Park Hotel Vitznau Where the natural beauty of the Alps unites with history and culture Next to the famous “queen of mountains”, the Rigi, Park Hotel Vitznau lies in an iconic landscape that takes the visitor’s breath away, ideally when the sun slowly rises behind the mountains on a beautiful summer day. Culture and history, nature and calmness are never far away. TEXT: JESSICA HOLZHAUSEN | PHOTOS: PARK HOTEL VITZNAU

Clear blue water is glistening in the sunlight. The hiker stops on his way up towards the mountain range, green meadows line the way from the shore towards the rocks high above the lake’s surface. Here and there snow and ice create a sharp contrast to the grey stone and the pale blue sky. On a gloomier day the mountaintops hide in the clouds. And while down in the valley it might rain, on the mountaintops

the sun still shines. Holidays at the Park HotelVitznau at the shore of theVierwaldstättersee – Lake Lucerne – allow to retreat and enjoy a sweeping landscape while never being far away from city life, history and culture. A landscape created by ice and water The lake has its origin in the last glacial period. When the ice began to melt about

12,000 years ago, the lake emerged. The lake and its surrounding mountains form an impressive and unforgettable panorama. The region around Lake Lucerne is an iconic historical place. On the western shore of the Urnersee, a sidearm of Lake Lucerne, lies the so called Rütli, today a idyllic alpine meadow. In the year 1291 representatives of the three cantons Uri, Schwyz and Unterwalden met here to swear an oath against the stewards representing the detested Habsburg rule – so says the legend that in the 19th century became an important myth about how Switzerland was originally founded. In a popular version of this story one of the representatives is called Wilhelm Tell, exactly