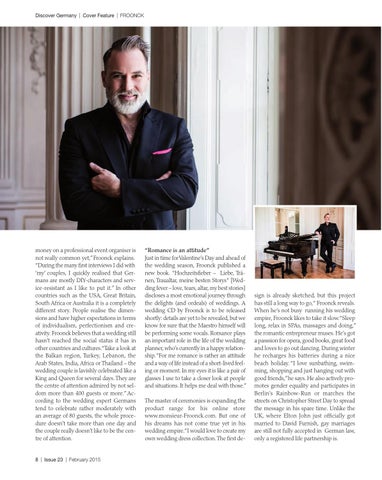 money on a professional event organiser is not really common yet,”Froonck explains. “During the many first interviews I did with ‘my’ couples, I quickly realised that Germans are mostly DIY-characters and service-resistant as I like to put it.” In other countries such as the USA, Great Britain, South Africa or Australia it is a completely different story. People realise the dimensions and have higher expectations in terms of individualism, perfectionism and creativity. Froonck believes that a wedding still hasn’t reached the social status it has in other countries and cultures.“Take a look at the Balkan region, Turkey, Lebanon, the Arab States, India, Africa or Thailand – the wedding couple is lavishly celebrated like a King and Queen for several days. They are the centre of attention admired by not seldom more than 400 guests or more.” According to the wedding expert Germans tend to celebrate rather moderately with an average of 80 guests, the whole procedure doesn’t take more than one day and the couple really doesn’t like to be the centre of attention.

“Romance is an attitude” Just in time forValentine’s Day and ahead of the wedding season, Froonck published a new book. "Hochzeitsfieber – Liebe, Tränen, Traualtar, meine besten Storys" [Wedding fever – love, tears, altar, my best stories] discloses a most emotional journey through the delights (and ordeals) of weddings. A wedding CD by Froonck is to be released shortly: details are yet to be revealed, but we know for sure that the Maestro himself will be performing some vocals. Romance plays an important role in the life of the wedding planner, who’s currently in a happy relationship.“For me romance is rather an attitude and a way of life instead of a short-lived feeling or moment. In my eyes it is like a pair of glasses I use to take a closer look at people and situations. It helps me deal with those.” The master of ceremonies is expanding the product range for his online store www.monsieur-Froonck.com. But one of his dreams has not come true yet in his wedding empire.“I would love to create my own wedding dress collection.The first de-

sign is already sketched, but this project has still a long way to go,“ Froonck reveals. When he’s not busy running his wedding empire, Froonck likes to take it slow.“Sleep long, relax in SPAs, massages and doing,” the romantic entrepreneur muses. He’s got a passsion for opera, good books, great food and loves to go out dancing. During winter he recharges his batteries during a nice beach holiday. “I love sunbathing, swimming, shopping and just hanging out with good friends,”he says. He also actively promotes gender equality and participates in Berlin’s Rainbow-Run or marches the streets on Christopher Street Day to spread the message in his spare time. Unlike the UK, where Elton John just officially got married to David Furnish, gay marriages are still not fully accepted in German law, only a registered life partnership is.