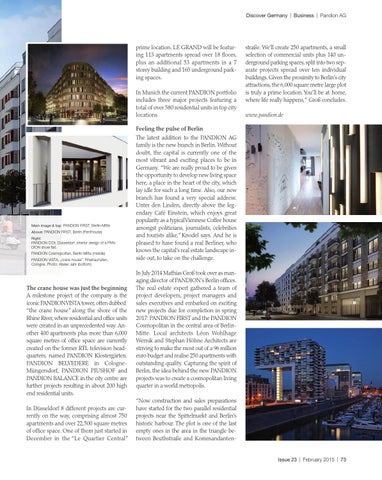 prime location. LE GRAND will be featuring 113 apartments spread over 18 floors, plus an additional 53 apartments in a 7 storey building and 165 underground parking spaces. In Munich the current PANDION portfolio includes three major projects featuring a total of over 580 residential units in top city locations.

Feeling the pulse of Berlin

The crane house was just the beginning A milestone project of the company is the iconic PANDIONVISTA tower, often dubbed “the crane house” along the shore of the Rhine River, where residential and office units were created in an unprecedented way. Another 400 apartments plus more than 6,000 square metres of office space are currently created on the former RTL television headquarters, named PANDION Klostergärten. PANDION BELVEDERE in CologneMüngersdorf, PANDION PIUSHOF and PANDION BALANCE in the city centre are further projects resulting in about 200 high end residential units. In Düsseldorf 8 different projects are currently on the way, comprising almost 750 apartments and over 22,500 square metres of office space. One of them just started in December in the “Le Quartier Central”

The latest addition to the PANDION AG family is the new branch in Berlin. Without doubt, the capital is currently one of the most vibrant and exciting places to be in Germany. “We are really proud to be given the opportunity to develop new living space here, a place in the heart of the city, which lay idle for such a long time. Also, our new branch has found a very special address: Unter den Linden, directly above the legendary Café Einstein, which enjoys great popularity as a typicalViennese Coffee house amongst politicians, journalists, celebrities and tourists alike,” Knodel says. And he is pleased to have found a real Berliner, who knows the capital’s real estate landscape inside out, to take on the challenge. In July 2014 Mathias Groß took over as managing director of PANDION’s Berlin offices. The real estate expert gathered a team of project developers, project managers and sales executives and embarked on exciting new projects due for completion in spring 2017: PANDION FIRST and the PANDION Cosmopolitan in the central area of BerlinMitte. Local architects Léon Wohlhage Wernik and Stephan Höhne Architects are striving to make the most out of a 96 million euro budget and realise 250 apartments with outstanding quality. Capturing the spirit of Berlin, the idea behind the new PANDION projects was to create a cosmopolitan living quarter in a world metropolis. “Now construction and sales preparations have started for the two parallel residential projects near the Spittelmarkt and Berlin’s historic harbour. The plot is one of the last empty ones in the area in the triangle between Beuthstraße and Kommandanten-