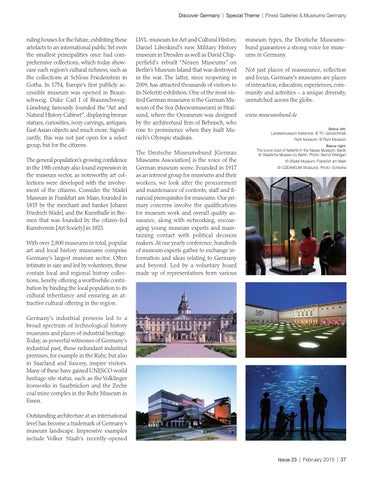 ruling houses for the future, exhibiting these artefacts to an international public.Yet even the smallest principalities once had comprehensive collections, which today showcase each region’s cultural richness, such as the collections at Schloss Friedenstein in Gotha. In 1754, Europe’s first publicly accessible museum was opened in Braunschweig. Duke Carl I of BraunschweigLüneburg famously founded the “Art and Natural History Cabinet”, displaying bronze statues, curiosities, ivory carvings, antiques, East Asian objects and much more. Significantly, this was not just open for a select group, but for the citizens. The general population’s growing confidence in the 19th century also found expression in the museum sector, as noteworthy art collections were developed with the involvement of the citizens. Consider the Städel Museum in Frankfurt am Main, founded in 1815 by the merchant and banker Johann Friedrich Städel, and the Kunsthalle in Bremen that was founded by the citizen-led Kunstverein [Art Society] in 1823. With over 2,800 museums in total, popular art and local history museums comprise Germany’s largest museum sector. Often intimate in size and led by volunteers, these contain local and regional history collections, hereby offering a worthwhile contribution by binding the local population to its cultural inheritance and ensuring an attractive cultural offering in the region.

LWL-museum for Art and Cultural History, Daniel Libeskind’s new Military History museum in Dresden as well as David Chipperfield’s rebuilt “Neuen Museums” on Berlin’s Museum Island that was destroyed in the war. The latter, since reopening in 2009, has attracted thousands of visitors to its Nefertiti exhibition. One of the most visited German museums is the German Museum of the Sea (Meeresmuseum) in Stralsund, where the Oceaneum was designed by the architectural firm of Behnisch, who rose to prominence when they built Munich’s Olympic stadium. The Deutsche Museumsbund [German Museums Association] is the voice of the German museum scene. Founded in 1917 as an interest group for museums and their workers, we look after the procurement and maintenance of contents, staff and financial prerequisites for museums. Our primary concerns involve the qualifications for museum work and overall quality assurance, along with networking, encouraging young museum experts and maintaining contact with political decision makers. At our yearly conference, hundreds of museum experts gather to exchange information and ideas relating to Germany and beyond. Led by a voluntary board made up of representatives from various

Germany’s industrial prowess led to a broad spectrum of technological history museums and places of industrial heritage. Today, as powerful witnesses of Germany’s industrial past, these redundant industrial premises, for example in the Ruhr, but also in Saarland and Saxony, inspire visitors. Many of these have gained UNESCO world heritage site status, such as the Volklinger ironworks in Saarbrücken and the Zeche coal mine complex in the Ruhr Museum in Essen. Outstanding architecture at an international level has become a trademark of Germany’s museum landscape. Impressive examples include Volker Staab’s recently-opened